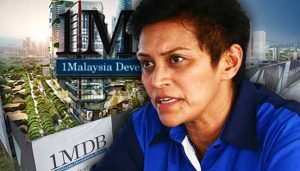 Ask yourself ONE simple question.

Umno-Baru tabling the hudud Bill for PAS, shows that Umno-Baru and PAS are thick as thieves.

Najib Abdul Razak’s infamous Sibu soundbite, “I help you, You help me” has seduced PAS.

A lawyer who is clueless.

Minister in the Prime Minister’s Department Azalina Othman Said, is a lawyer. She should know that The Hudud Bill goes against the Federal Constitution.

You cannot have a nation ruled by more than one set of laws. All herÂ  training has been wasted.

Azalina must be feeling the heat from the furious backlash against The Hudud Bill.

She now claims that the Prime Minister, Najib and the Deputy PM, Zahid Hamidi, ordered her to move PAS president, Hadi Awang’s Hudud Bill from the bottom of the list, to the top.

What you see in parliament reflects Malaysian public life.

Don’t beleive me? Please observe the queues at some Post Offices (PO). People who enter the PO, go straight to the top of the queue, and ignore those who have been patiently waiting for hours.

We must stand up to bullies. Get rid of them.

Azalina is afraid to advise her bosses.

Azalina is the minister in charge of parliament. She has the right to discuss with her bosses,Â  the possible ramifications, of tabling The Hudud Bill.

How well informed is Azalina?

If Azalina had read books or news on global issues, she would know that countries with hudud have serious socio-economic problems and are poor.

There is nothing wrong with educating her bosses about nations ruled by hudud. They are too busy gallivanting all over the world, to read.

Malaysian women in Cabinet are weak-willed and subservient.

Under hudud, women will suffer the worst.

What are Azalina’s views on the punishment of LGBTs, under hudud?

The public is angry about hudud. Only PAS and conservative Muslims are pleased.

Azalina distances herself from Hadi’s Hudud Bill and claims that she was carrying out a parliamentary procedure.

Like all Umno-Baru politicians, Azalina is good at making U-turns when theÂ  rakyat is angry.

As a lawyer, she knows that a country cannot have a multi-tiered system of laws.

The real reason for The Hudud Bill being tabled.

There are two by-elections. Both Umno-Baru and PAS are scared.

The rakyat is fed-up with corruption and religious extremism.

The Hudud Bill is not about religion.

The Hudud Bill is to distract you from 1MBD but especially from the fact that Good Star Limited is owned by Jho Low, Najib’s good friend and business associate.

Taxpayer’s money amounting to several hundred million ringgits was sent to Good Star, instead of PetroSaudi, for investment.

Since when does one man benefit from YOUR money?

It is YOUR money.

Ask for it back so that it can be used to build drains to cope with the flood waters, better infrasturcture and more.

Taxpayer’s money is not for Najib and Jho Low to use, and buy apartments in New York and London.

You are angry when I take RM50 from your wallet. Why do you not react when someone steals all of your money?