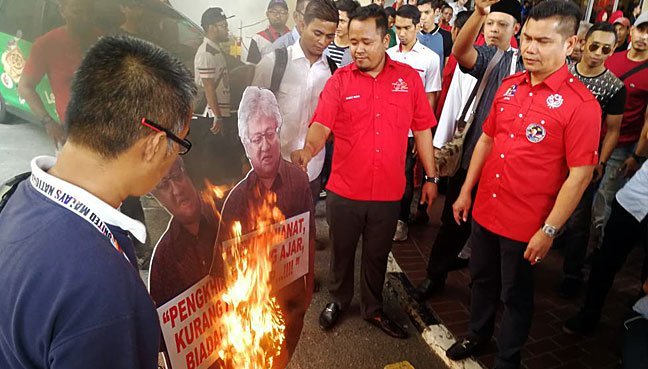 Take heart, Zaid Ibrahim. The rakyat is with you, although they dare not show it.

Zaid spoke out, when millions of us, would only voice out behind closed doors, and in selective company.

The disgusting behaviour of Jamal Yunos, a thug, for want of a better word, should not be allowed to continue without censure. He has threatened Zaid, burned his effigies and used a sledgehammer on another. 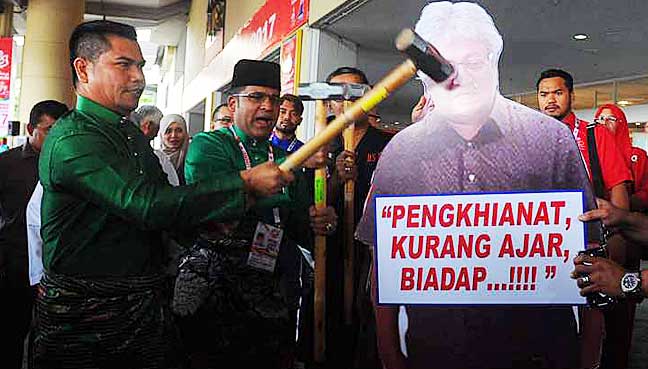 Naturally, Zaid fears for his security and that of his family.

Remember when in 2015, another thug, the Animal Action Group president Sharul Nizam Ab Rahim, threatened on Facebook, to break into the home of the G25 member, Noor Farida Ariffin, and rape her over her criticism of laws prohibiting khalwat (close proximity among unmarried couples)?

When Zaid resigned as Law Minister, in 2008, as a protest against several arrests under the Internal Security Act, I and a few others openly supported his move. He was principled and brave. Many praised him, only in secret, because they did not dare show him any support. Umno-Baru will punish people who are critical of the party and its supporters.

Fast forward nine years, and many Malaysians are more vocal now, over a spectrum of issues, but they are still very wary. The politics of fear is deeply entrenched in our society.

A few days ago, Zaid upset the Sultan of Selangor, when HRH referred to former PM, Mahathir Mohamad’s “Bugis pirate remark” and wanted him to apologise for making it.

When the ruler said that Mahathir’s anger could raze the nation, Zaid tweeted, “Selangor Sultan should be careful with his words. No one is immune when the country burns.

“When some rulers play politics; they must know the consequences. Don’t think there’s no price for partisanship.”

Zaid is right. If the country is razed, everyone, is affected.

Each of us, regardless of our status in life, has a responsibility to play. We must look at the bigger picture.

Zaid may not realise it, but the people are with him. The problem is that many of them, are just ordinary members of the public; they have no kabel  to the top, and no one in high office to protect them.

It is not strictly correct to say that the Chinese do not fear repercussions. They face an inordinate amount of discrimination daily, and are not afraid of being more vocal, because they probably feel they have nothing to lose.

Most of them are employed in the private sector, where they do not face a backlash, unlike those in government service.

We hear of servicemen, and teachers being transferred, at a moment’s notice, for criticising the government, on Facebook. Punishing civil servants like this, is wrong.

Apart from a small minority, many Malays are afraid of giving their opinion. Their fear of being vocal, and their lack of making a stand, is not because they fear repercussions.

It is not because they have no opinion, but either by indoctrination or by design, Malays are intellectually weak.

Many Malays are not well informed. They are too lazy to find out what goes on around them, in their lives. Reading and seeking knowledge is not in their psychological make-up. This means that they cannot form an opinion, because they simply do not know what to make of things.

They prefer to keep quiet, and play safe. That way, they cannot be slammed for their possibly misguided opinions, or incorrect conclusions.

Look at social media sites and newspapers which cover news about divorce and celebrity gossip. The Malays are extremely vocal, and are not afraid to voice their opinions about a couple’s adultery or infidelity, and the commentators on these sites, are mostly Malay.

On the other hand, commenting on political and social issues requires hard work. The average Malay mind is unable to devise solutions to help the nation.

It is worse if the issue concerns royalty, because the Malays have been conditioned to keep quiet. Rightly or wrongly, they are then blamed for being serf-like. 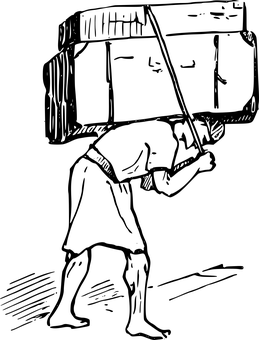