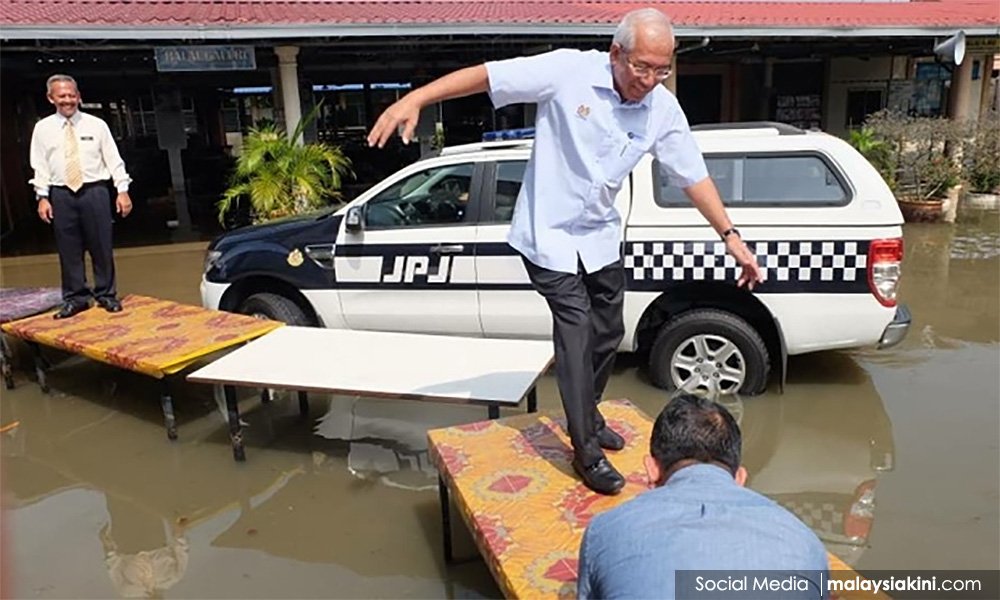 The expression to find oneself in hot water means to do something wrong and find that people are angry with you. This time, there is no hot water, only  muddy and dirty floodwater.

Both the Education Minister, Mahdzir Khalid, and his press secretary, Mohd Razman Yaacob, have denied claims that the minister had tables arranged for him so that he could walk on this makeshift walkway, in the floodwaters when he visited a school in a flooded part of Penang.

The video had gone viral on social media. The assertion is that Mahdzir wanted to avoid getting his precious shoes dirty and his feet wet.

Compare this photo of the Sultan of Brunei, wading through floodwaters (2014). 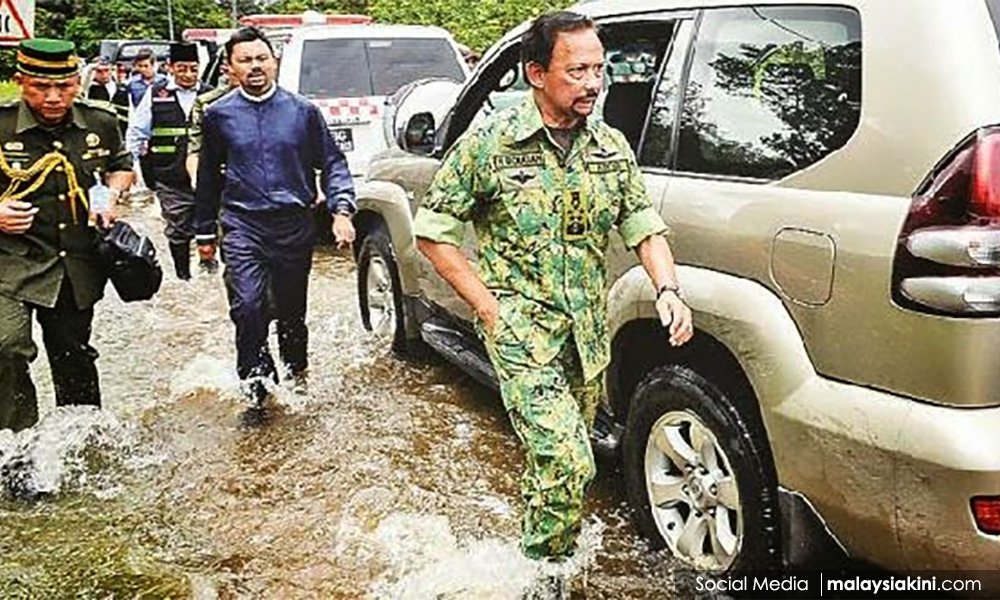 Mahdzir’s aide, Mohd Razman, was outraged that members of the public had claimed the minister was afraid of the water, did not want to get his shoes dirty and his feet wet.

He told Utusan Online,  “The issues which went viral do not arise…The visit was not on his schedule, coincidentally he was in Penang (when the flood happened) and expressed his intention of wanting to visit those sitting for the SPM examination at the (particular) school.

“The tables were arranged (to form a walkway) when the floodwaters reached the thigh level so that it can be used by both students and teachers when being transferred by vehicles to their respective halls,” he was quoted as saying by Utusan Online.

Malaysiakini reported that Mohd Razman expressed regret over the slander, as well as the action of netizens who shared the photograph and the allegations without knowing the facts.

“This slander from certain quarters is inappropriate. We have to think first before slandering (someone), don’t circulate (such claims) without the right information,” he said.

Does Razman think we are daft?

Guess who else was spotted walking through the floodwaters?

A video of Prime Minister Najib Abdul Razak and his wife Rosmah Mansor was also circulated on social media, showing the couple walking through the floodwaters with press photographers clicking away. This angered certain sections of the public who claimed that the publicity shoot, was orchestrated for publicity.

One hopes that the FLOM’s aide was able to cart away the Manolo Blahniks or Jimmy Choos or whatever footwear she was wearing and kept the Birkin bag safe. Leather bags which have been soiled by muddy water are not a pretty sight, nor are they useable after that.