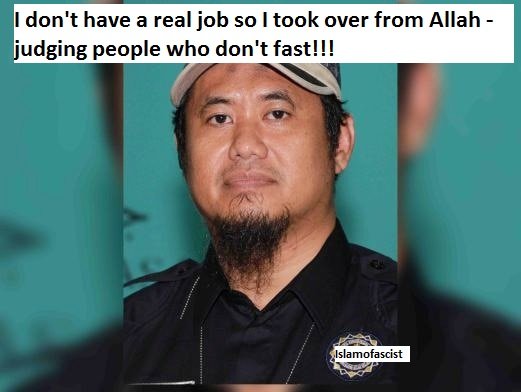 Farouk A Peru: Every year, it’s the same thing. Religious officers from state religious departments have begun operations to catch out Muslims who do not fast. They will be patrolling the streets looking for these naughty Muslims and in the past, have taken them away in hearses to be paraded for all to see. Is this an ‘Islamic’ activity?

Today, I read the ominous warning from an enforcement officer of the Islamic Religious Department of Malacca,  division operations unit chief Noraminuddin Aziz. He said “five or six JAIM officers would carry out the monitoring in rotation on premises suspected of being ”hotbeds” for Muslims who did not fast.

According to him, those caught would be given a summons notice and they would then have to go to the JAIM office to facilitate investigations under Section 49 of the Syariah Offences Enactment of Melaka 1991 for the offence of selling and eating food during Ramadan.

“In addition, Muslims found eating, drinking and smoking in public places can also be prosecuted under Section 49 of the same enactment with a maximum fine of RM1,000 or imprisonment up to six months, or both.”

What are the religious departments trying to achieve?

I would like to ask the question – what are the religious departments trying to achieve here? That the Muslims achieve greater piety? Would forcing them to fast achieve that? Life is already hard enough! What if a person simply had too much on her plate that day (pardon the pun!) and simply needed a drink to keep going? If it wasn’t her day, she would be caught, fined RM1000 or face imprisonment! What kind of a system is this?

Another question I would like to ask is, how do the authorities recognise such individuals? I once had a Chindian schoolmate who had nightmares every Ramadhan. He looked Malay and so was in constant fear that he might get accosted for not fasting. This is the strange thing about these practices, it all boils down to simple racism.

In truth, these activities are there simply to give individuals who are otherwise unqualified for anything else jobs. These activities are a shame upon our society. The ulama keep drumming into people’s heads that ‘Islam is a religion of mercy’ and that Prophet Muhammad was a ‘rahmahlil ‘alameen’ (a mercy unto the worlds!) and he never institutionalised any of these good squads. Why not follow his sunnah here?

Khairy Jamaluddin, who only takes flattering questions, has rightly said that religious officers should stop these activities and help the poor instead. I could not agree more. Why are they wreaking havoc on people’s lives? Either get rid of them or replace the government who gave them authority!