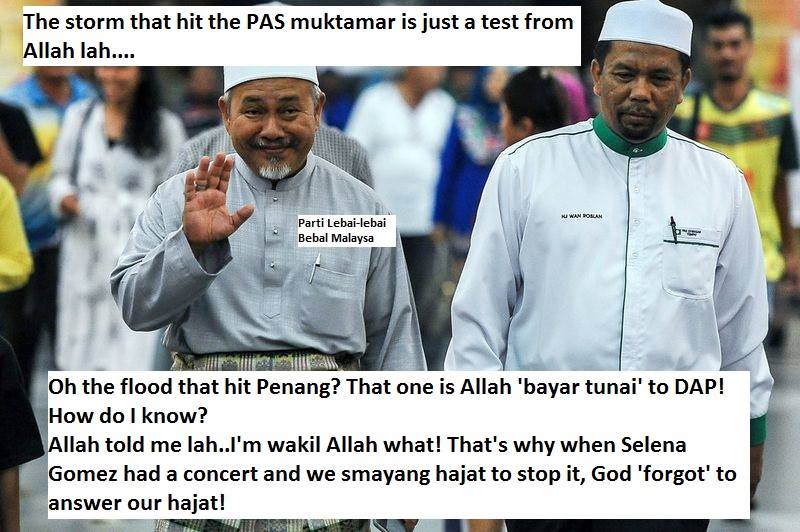 The muktamar Pas just ended today and as usual, we find nothing new with their rhetoric. There is absolutely nothing about the state of the nation of trying to fix it (beyond smayang hajats, special prayers which actually never work. Selena Gomez will tell you!).

Very sadly, during this annual dance around the fire, a storm hit the Kedah Pas Complex in Kota Sarang Semut. A tent actually collapsed and thirteen people were injured. A most unfortunate occurrence.

Of course, Pas knew that this would be touted as God’s wrath against them and their reputation as God’s representatives in Malaysia would be in jeopardy. Tuan Ibrahim Tuan Man, the deputy president of Pas, quickly said that this was just a test, not the wrath of God at all.

One must praise God’s messenger service for relaying a message so quickly to Ibrahim! How else would he know? After all, whenever rival political parties suffer from natural disasters, Pas says they were ‘paid in cash’. Pas seems to have a direct line to God. Too bad He doesn’t fulfil their ‘smayang hajat’ as quickly…or ever.

Then of course we have the cult leader Hadi Awang. Hadi also seems to have a god complex. Whoever rejects his contrived version of Islam is an enemy of Islam itself. He has no clue at all about interpretation. He also seems to be very confused.

On one hand, he says we must respect people of other races and religions, on the other hand, he feels Islam is under threat. By whom exactly? It’s difficult to tell with Hadi. If Pas’ muktamar is a dance off, then Hadi is their Baryshnikov!

Pas’ infatuation with Umno is also carrying on. Hadi thanked the Federal government for tabling his doomsday RUU355 which did not succeed. Another Pas delegate says a bigger enemy than Umno, is Dap, which is at least more honest.

Perhaps the most uncanny event is the fact that the opening addresses by Pas delegates including cursing a political party (jahanam Pan!) and calling for liberals to be ‘wiped out’ (not ISIS style, we hope!).

What a great attitude for a ‘party of God’ huh. All this came just before that fateful storm. Of course, all just a ‘coincidence’…