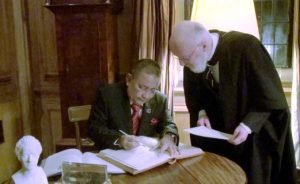 In 2011, Prime minister Najib Abdul Razak was all praise for the new chairman of Felda, Mohd Isa Abdul Samad, and brushed aside allegations linking his appointment with the jitters in the stock market.

According to Najib, Isa’s appointment was based on Isa’s expertise in administration, management, leadership and good relationship with the people.

His answer was in a written reply to the MP for Segambut, DAP’s Lim Lip Eng, who had earlier asked the prime minister, the rationale behind Isa’s appointment.

Isa was initially suspended for six years from June 24, 2005, for money politics in the 2004 Umno-Baru elections.

Lim wondered if the good name of Felda would be affected with the appointment and if it had caused uncertainty in the market.

Najib claims that Isa’s appointment had no bearing on share price movements.

Najib said, “His (Isa’s)  experience in administration, politics and community development meets the criteria for appointment as the Felda chairman, a post where he is directly involved in matters pertaining to the development of Felda and its settlers.”

He said, “There have been many GLCs that have ex-politicians appointed as chairpersons, but Felda is a rare case, where the market is concerned with such an appointment. It sends the wrong signals”.

The National Economic Advisory Council member Zainal Aznam Mohd Yusof who played a major role in the preparation of the Second, Fourth and Fifth Malaysia Plans, was more critical of Isa’s track record of graft and simply said, “It was a sad day when Isa was appointed chairperson of Felda.”

He believed that Isa’s appointment was a blow to Felda’s solid reputation in the developing world and said that real reform could only be achieved if there was a blanket ban on the appointment of politicians to head GLCs: “Why not say politicians cannot be appointed, no matter which political divide you are from, or whether or not you are corrupt? Power corrupts, so the basic assumption is that (politicians) are stigmatised as corrupt”.

Other dissenting opinions came from former Tourism, Arts and Culture Minister Abdul Kadir Sheikh Fadzir who said, “If the founding fathers could see what is happening now, they will turn in their graves. Corruption is everywhere, you have to bribe people to get things done. Cronyism is everywhere.”

Nevertheless, Najib ignored all protestations and for reasons of his own endorsed Isa Samad’s appointment. Speculation has been rife that past indiscretions linking Najib and Isa has compromised Najib’s already tarnished reputation

At a luncheon for former ministers which was hosted by former DPM Musa Hitam, former PM Mahathir Mohamad said that corruption would take Malaysia on a downward slide.

At that event Mahathir remarked that Malaysia had reached the top but appeared to be sliding back, because of corruption

Mahathir has not altered his view on Isa and how the public would perceive Umno-Baru as being a corrupt party which condoned corruption.

In 2009, when Isa was selected to run for the Bagan Pinang state by-election, Mahathir said that Umno-Baru’s image would be affected because people would think that the party was not serious about fighting money politics. He disagreed with Umno-Baru’s candidate, because Isa was guilty of corruption.

He said, “Tan Sri Isa has already been found guilty. If Umno-Baru fields him, it means that Umno-Baru is not serious about such cases. Even if he can win there, (we) have to consider what the whole of Malaysia thinks of Umno-Baru.”

Abysmal 2015 Auditor General report, Cambridge fellowship for Isa Samad and what happened to the MACC investigation into his son’s luxury hotel purchase, in London?

What has happened to the MACC investigation into Isa’s son’s purchase of a luxury hotel in Bayswater? This was in March 2015, when Park City Hotel was renamed Grand Plaza Hotel.

Five years after Najib appointed Isa, as the FELDA chairman, Isa has been made a fellow of Pembroke College, at The University of Cambridge. This was in January 2016.

Is Cambridge University not concerned about the reputation of Isa Samad?