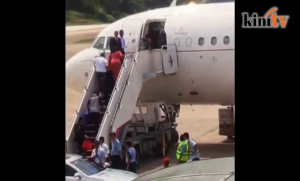 KakRos, or the self-styled First Lady of Malaysia (FLOM), Rosmah Mansor is the subject of many of Zunar’s cartoons. Her extravagance has been well documented in the papers and in social media. Just trawl the net for that.

She used a private jet for a trip to Istanbul, to receive an award.

Nothing wrong with that, BUT taxpayers’ money paid for her private jet. Yup, your money and mine.

Everytime you complain about rising Highway Toll charges, remember that some other people get to fly the world, in luxury, for free and YOU paid for their travel.

Why didn’t she use MAS?

As the spouse of the PM, she is probably entitled to go First Class. So, why waste “duit rakyat” on her own private jet?

On previous occasions, the rakyat (citizens) were outraged she had used the government jet for her own private travel.

In First World countries, spouse/family are NOT allowed to do this. If it had happened, the PM or President of that First World nation would be given a hard time in parliament and perhaps, resign.

If it was claimed that The FLOM had a tight schedule, why not tell the Malaysian Ambassador to Turkey, to collect the award on her behalf.

Moreover, if she was short of time, why did she need that many bags for this “brief” visit?

How many people accompanied her?

Look at the video carefully.

How many bags does one need to collect an award? Even if the FLOM had the latest designer clothes, why could they not go into the airplane’s hold?

Why did they have to be inside the jet?

Did she have to keep a beady eye on the bags. So, does it mean that the contents of the jet are PRECIOUS?

Can’t be gems.. There are too many bags for that. Even several rings costing a few multi-millions each, can be chucked into a voluminous Birkin.

So what is in the bags?

Presents for the hosts? Why can’t these be put in the luggage hold?

Documents to work on during the flight? No! She went to receive an award. A thank you speech is all that is necessary.

Do you remember a certain businessman from Sabah, who was caught with something contraband in his bag.

Do you remember a certain MB who went to Australia many years ago and was caught with some precious items in his bag?

Could the contents of the FLOM’s bags be similar? Your guess is as good as mine. 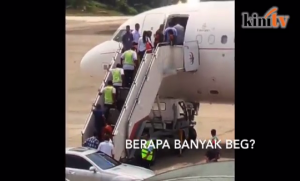 The PM has many questions to answer.

Will he? Of course not! His aides will spin and spin for him. He always has nothing to say.

That is the PM some of you elected to lead Malaysia. And of course, he has some extra baggage which he cannot jettison. 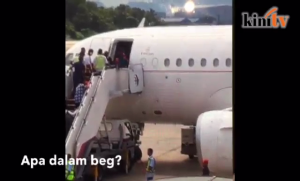