In 2015, the Penang government unveiled the Penang Transport Master Plan (PTMP) to help alleviate traffic congestion on the island. It comprises an LRT, an undersea tunnel and three highways. In order to fund this controversial RM46 billion project, the state government proposed that it would reclaim around 1,800 hectares of land, in what is known as the Penang South Reclamation (PSR), to be sold, to developers. 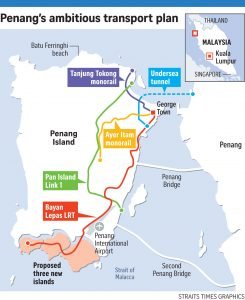 Opposition to both the PTMP and the PSR has been swift and unyielding. Penang’s fishermen have complained that their livelihoods will be affected and that reclaiming the land, by dumping material like sand, from other locations, will harm the plankton and threaten the fragile breeding grounds for fish, crustacea and shellfish, in the bay.

If the artificial islands are constructed, the fishermen  will have to travel further out to sea, in boats which are meant for  onshore fishing and are not equipped for open-sea, offshore fishing potentially risking conflict with the trawlermen. 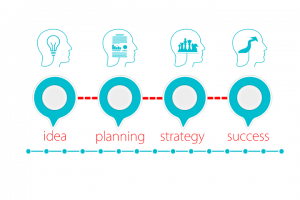 In Penang, an urban planner, with thirty years experience in environmental monitoring and assessment, has voiced his objections to both the PTMP and PSR projects.

On condition of anonymity, and on the the basis that the Penang State Government makes the boast that  it is a  ‘Cleaner, Greener Penang’ he said that he was not against the PMTP, but said that a holistic view of the project should be adopted. He alleges that the original idea to alleviate traffic congestion, was first mooted over 20 years ago, and it resulted in a plan prepared by a British consultancy firm.

He said, “This plan is somewhat outdated, due to the increase in population, physical development and increased car ownership. Nevertheless, its principle can still be utilised, if these changes are taken into account.

“More roads would not alleviate traffic congestion. What will happen if these new roads become jammed? Build more new roads? This is not a solution and is not sustainable. More roads simply increase the level of vehicular pollution, especially particulate matter, nitrogen dioxides and carbon monoxide.” 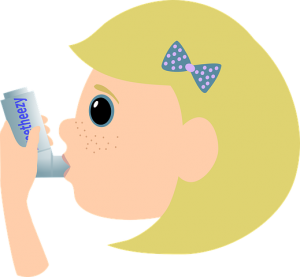 He said that vehicular pollution may exacerbate the symptoms of children with asthma, as recent studies have shown that there is a link between asthmatic children and vehicle pollution. “One of the proposed elevated highways would be constructed in front of at least three schools. One should ask if a temporary reduction of traffic congestion should be made at the expense of the health of these children. This highway also goes through the ‘Youth Park’. Should the users of this park be exposed to vehicular fumes while they exercise?”

One of the proposed roads will pass through a tunnel, and he is concerned if the emergency services may lack the equipment and the training to cope with a fire in the tunnel, or a collapse of the tunnel.

He proposed the building of an electrical rail link from Georgetown to the airport and the Free Trade Zone, to reduce the number of vehicles on the road, in particularly to the Free Trade Zone. He added, “All major cities in the world have rail links to town centres.” 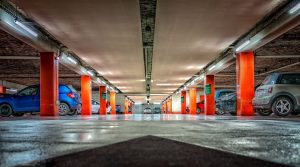 Aware that it would be difficult to change people’s mindset concerning private vehicles, he proposed the building of a few multiple-storey car parks around Georgetown, to encourage people to use public transport, in particularly to the Free Trade Zone. He said, “For this link to be successful, it must be clean, cheap and efficient. The link would reduce the number of vehicles on the road, thus solving the congestion issue, and also reduce the amount of vehicular pollution.

“The elevated highways would also pass a hospital, schools and residential areas. Their construction is not considered sustainable, because very mature trees would have to be cut. The state Highway Engineers must learn modern highway techniques and solutions.”

On the PSR project, he said, “The reclamation of the three islands needs more analyses, before implementation.  Town Planners need to consider the physical, economic and social implication of every proposed project..” 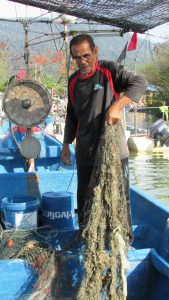 He wondered if the impact of soil and sand erosion, on the existing and future ecosystem of the area had been considered. He wanted to know what would become of the local fishermen and local cottage industries. He also wondered if the unique ambience of the area would be lost.

He said, “Do the economic factors outweigh the social considerations? I am not saying that development should be scrapped,  but we must not be gung-ho and must conduct more studies before implementing the plans.

“The maxim of a “Cleaner, Greener Penang” has not been upheld by the Penang State Government.”

So, will Chief Minister, Chow Kon Yeow, be willing to accommodate these views? 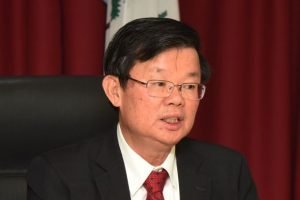 NB: These are the personal views of the writer/guest contributor and do not necessarily represent the views of Rebuilding Malaysia.