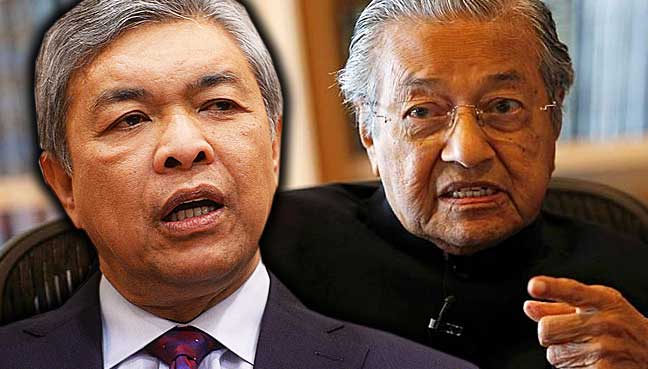 If Dr Mahathir Mohamad, whom the Deputy PM, Zahid Hamidi, complained was part Indian, could become prime minister, there should be no reason why another non-Malay cannot become PM of Malaysia.

Zahid has been involved in politics for over three decades. He served more than half of that time, under Mahathir, whom he now criticises for having Indian blood and for exploiting the Malays.

As Zahid had no qualms about serving under Mahathir then, this means that there should be no problem with a non-Malay becoming the Prime Minister of Malaysia.

Yesterday, Zahid used his phone, to show an image of an Identity Card which he claimed had been sent him by the National Registration Department director-general, and said, “This was his (Mahathir’s) blue IC. His name was Mahathir a/l Iskandar Kutty. His blue IC number is […]…He is the son of Iskandar Kutty. This is the person who fought for the Malay agenda in order to use Malays.”

Actually Mahathir is right. “Melayu mudah lupa” (Malays easily forget) because as MP, Zahid did not complain being under Mahathir.

In 1995, Zahid became MP when he won the Bagan Datoh parliamentary seat in Perak in the general election.

Then, in 2000, Zahid was elected into the Umno-Baru Supreme Council and appeared happy to serve under Mahathir.

Mahathir did not leave office until 2003.

Strange why Mahathir’s Indian lineage did not seem to bother Zahid during those early years.

So, why is Mahathir’s ancestral origins an issue in July 2017?

Or did he finally pluck up the courage to openly question Mahathir’s lineage?

Umno-Baru is desperate. The only way to cling onto power, is to dig up anything that will rile the Malays.  Sex videos did not work, because there were too many adulterous Umno-Baru/BN MPs.

They used the sodomy tactic on former Opposition leader, Anwar Ibrahim and jailed him despite a flawed trial and dodgy evidence.

Perhaps, if Mahathir had chipped a coffee mug during his time in office, a desperate Zahid would dig up and sensationalise that story.

No Malay has ever been PM.

Past Malaysian PMs were not 100% “Malay”. They have combined “Malay” and “non-Malay” blood.

Abdul Razak and Najib are Bugis.

Mahathir is a mamak.

Zahid has proven that he, and the rest of the Cabinet, had no issues with a non-Malay PM.

No Malay has been prime minister.

So, let Malaysia be led by the most capable man or woman, Malay or non-Malay, Muslim or non-Muslim.