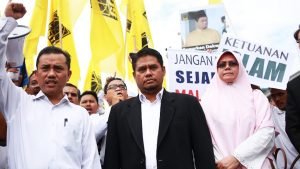 ISMA is under extreme pressure, especially as it must make itself relevant in 21st Malaysia. It goes on the defensive by attacking working women and Malay women who fight for women’s rights, equality, justice and empowerment.

Three weeks ago, Dr Rafidah Hanim Mokhtar, of Wanita ISMA (the Islamist group, Ikatan Muslimin Malaysia)Â said that I babbled too much, was insecure, was not knowledgeable on Islam (I never claimed to be) and my incoherent ramblings misled others. Please read her tirade, reproduced in full, below.

I particularly like the bit where she detailed her week’s diary, where she listed what she was doing, how important she is, basically, blowing her own trumpet at her self importance. I wonder if she imagines that I am a tai-tai, drinking G&T’s all day, smoking cheroots, having nothing better than toy boys massaging my toes and etc.

Today, the president of ISMA, Abdullah Zaik Abd Rahman,Â criticisedÂ  working women, whom he termed feminists, who were basically homewreckers because by working, they ignored hubby and the kids.Â

Typical hypocrite! What about the men who completelyÂ abandon their responsibilities as hubbies? Or the ones who take a 16-year-old virgin as his 3rd wife? Or those who don’t pay alimony when they divorce? 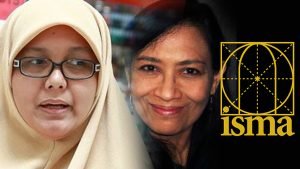 I wonder whereÂ The Ant DailyÂ get their columnists from. How was it that one feminist fretting over her insecurities passed off as an article? We’ve been reading the same babblingsÂ  over and over again. They hardly make meaningful intellectual contributions.

These grouses are common whenever Islamic scholars give advice concerning Muslim women, protesting that men are always spared the reminder (men are reminded as well, they just donâ€™t look for it hard enough, or selectively ignore it).

Now even when advice is given to Muslim men, they still throw tantrums. This was the case when Mariam Mokhtar, as she glaringly displayed her shallowness in understanding Islam, complained when she referred to Sahibus Samahah Ustaz Zamri Hashim’s article inÂ Berita HarianÂ on the responsibility of a man towards his family.

She couldn’t in the first place, differentiate the sayings of Prophet Muhammad SAW from words of the Deputy Mufti.

She stated that “Zamri claimed that three groups of people would be stopped from entering heaven”. She tried very hard to convince readers that these are the words of the Deputy Mufti of Perak.

They are not. The least she could do was to quote the primary source, which are the exact sayings of the Prophet Muhammad SAW and not mislead her readers into believing that this is just another manâ€™s words.

The hadith mentioned is as reported below:

Is she now protesting the sayings of the Prophet Muhammad SAW?

I too had read the piece last Friday. I am happy that men are reminded of their obligations to protect me and my children. Yes, the word protector was mentioned five times in the article and I simply couldnâ€™t understand why Mariam Mokhtar must be offended by them.

Thereâ€™s also nowhere in the article that Ustaz Zamri had degraded women. He reminded men, and he reminded women alike on what Quran says about our modesty. If, the requirement of hijab is still a personal problem to Mariam Mokhtar, she is wrong ethically and morally as a columnist to paint the Deputy Mufti in a bad light.

I read the advice given in Ustaz Zamriâ€™s article, understood it, went about my usual duties which I had planned for the whole week. I responded to one university abroad that had invited me as a speaker, attended a womenâ€™s action task committee in the Ministry of Heath, went through a studentâ€™s dissertation and prepared paperwork for two upcoming seminars.

The women in Wanita ISMA were also far from being depressed by the reminders in the said article. We discussed about the Malaysia Millenium Development Goals Report 2015 summary, on how we could address this in the upcoming PERWANIS and improve the policies. A quick check on our Shah Alamâ€™s branch revealed that the seminar on â€œViolence against Womenâ€ is on schedule this weekend, and the fund raising project for Womenâ€™s Shelter Home in Johor by the Johor branch is progressing well.

No, we did not think of cooking utensils, bread makers or brands of vacuum cleaners.

I donâ€™t know why feminists always do. Itâ€™s all in their head.

Every criticism which is fair, intelligible and well written, such as this one, will be published, even if itâ€™s uncomplimentary to us or our writers.Â The Ant DailyÂ will give readers the right of rebuttal within the confines of journalistic decency and decorum. Â Â