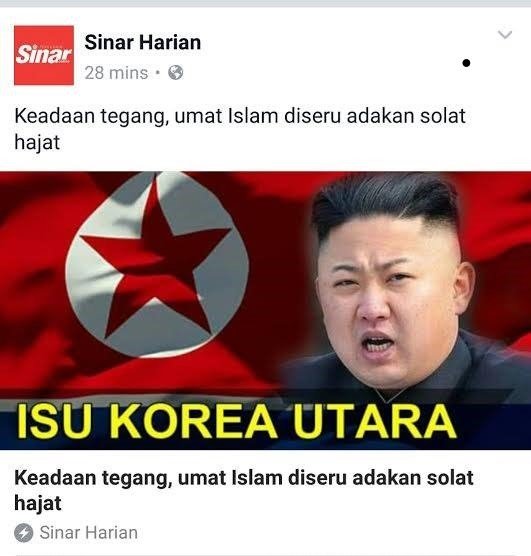 I did not believe  the poster, when I first saw it in Sinar Harian; then, I read a report about Jamil Baharom, calling on all Muslims to pray for the nine Malaysians “trapped” in Pyongyang. It appeared in a report in Malaysiakini’s Bahasa Malaysia edition.

What a cheek! The PM and his Cabinet told us NOT to politicise the North Korean impasse; then, they went ahead and did it.

Quietly, they called on Muslims of Malaysia to hold special prayers in mosques. Not just for today’s Friday prayers, but everyday until the situation is resolved.

Why ignore the rest of the population? The Christians, Buddhist, Hindus and other faiths. They are just as concerned for their fellow Malaysians in Pyongyang.

Jamil, has not just insulted all Malaysians, he is also dividing us. In other words, Muslims and the rest!

We support every effort to release the 11 Malaysians in Pyongyang. Individuals who are friendly with The Supreme Leader. Other nations’ efforts. The UN. PRC. 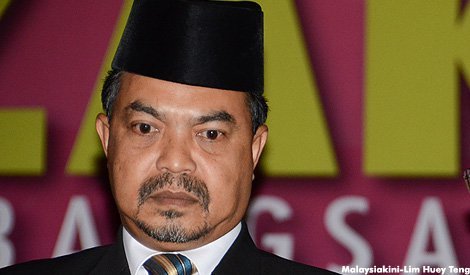 We do not follow you blindly. We are not sheep.

The PRC is a staunch ally of North Korea. We are sure the PRC, who has around RM144 billion of vested interests in Malaysia, is probably doing its best to mediate. We are confident everyone, is doing their bit to help free the nine Malaysians and restore diplomatic relations.

Putrajaya could have had more negotiations, but they quickly chucked out the Ambassador. Perhaps, that was part of their plan.

Putrajaya must NOT underestimate the rakyat’s intelligence. Do not abuse the rakyat because this episode reminds us of Putrajaya’s mishandling of the Lahad Datu incursion. Afterwards, they milked it to their advantage, for GE-13.

Today’s call for special prayers, for Muslims only, is a signal that GE-14 is close.

Sadly, nine Malaysians in Pyongyang have been made the sacrificial lambs in Putrajaya’s political game.