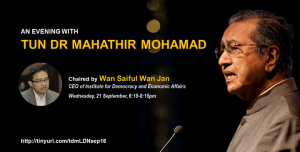 He told Al Jazeera, that Najib has “gone off track” and that Najib has “done a lot of things which are actually wrong, and as a result he has put the country in a very bad position.”

On Malaysia’s future, Mahathir said, “If Najib is there, this country will go to the dogs.”

And back in Malaysia, the Perak mufti is clamouring for statues to be demolished.

Langkawi residents, hold their breath, that their eagle statue will not be destroyed by die-hard Muslim fanatics.

The residents of Menglembu (an area in Ipoh famous for its groundnuts) prays that the three groundnut statues at a roundabout in Menglembu will not be smashed, the rubble used to surface roads.

The residents of Kuching are guarding their cat statues whilst the swan statue in Sibu is safe – man-eating crocodiles guard it.

Ahhhh! How did Malaysia get to this stage?

Mahathir ruled Malaysia for 22 years. He declared Malaysia to be an Islamic state. It is not!

He only said this to convince Malay/Muslims, that Umno-Baru and NOT Pas is the party which will protect them.

Mahathir clipped the wings of the royals, but forgot (or omitted) to curb the powers of the religious men, who now run riot and rule our lives with fear.

Mahathir is adored by many Malaysians. but he is right that many people also do not like him, and as for accusing him of doing the same things which Najib is allegedly guilty of, he told Al Jazeera, “What is the evidence that I did anything wrong?”

Najib has been cleared of all charges of corruption thanks to the Attorney General. Pity the poor makcik and other souls in Malaysia, who stole milk to feed their babies. They do not have friends in high places.

Please attend this event and see what Mahathir plans for Malaysia’s future. 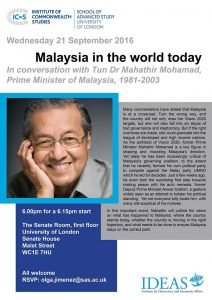