Najib and Mahathir go into a bakery on a campaign trail.

As soon as they enter the bakery, Najib steals three curry puffs and puts them in his pocket.

He says to Mahathir “See how clever I am? The owner didn’t even see anything and I don’t even need to lie. I will defintely win these elections.”

Mahathir says to Najib, That’s the typical dishonesty you have displayed throughout your entire life; trickery and deceit. I am going to show you an honest way to get the same result.”

Mahathir goes to the owner of the bakery and says, “Give me a curry puff and I will show you a magic trick.”

Intrigued, the owner accepts and gives him a pastry. Mahathir swallows it and asks for another one. The owner gives him one and he eats it as well. Then Mahathir asks for a third pastry and eats that too.

The owner is starting to wonder where the magic trick is and asks, “what did you do with the three curry puffs?”

This may be a joke but it describes Mahathir down to a T.

He crucifies Najib (and rightly so) for alleged stealing. But how much did he cost the nation? His crony politics, rescuing of businesses that went belly up – including his son’s shipping company, his trying to corner the tin market and his spending on projects like the Petronas Twin Tower and Proton to feed his ego. (Now he wants another national car – to be taken over by another Chinese company later?). And I am only just beginning.

And Malaysians like to know how did he and his family become so rich? I don’t think Najib is the only alleged thief.

That’s all in the past. What of now?

In the recent failed coup d’etat, or putsch, powergrab or whatever you want to call it. The story now is that Mahathir stood on principles and would not join in this attempt to seize power by the backdoor. Some commentators have made him out to be holier than holy. Unfortunately many gullible Malaysians believe this.

Nothing is further from the truth.

You just have to piece the events together and you see a different picture.

For months, Mahathir has evaded the question of the handover to Anwar. One day he says he will stick to his word. The next day he says that he will abide by the people’s wishes (meaning that if they want him to stay he will). He is as slimy as an eel. And if you have ever tried to catch one  you will know it’s not easy.

Then there is his promotion of Azmin Ali as the economic czar. In one stroke he castrated Lim Guan Eng . Never before has a Finance Minister been so emasculated.

You can see how he allowed Azmin to cozy up to him when he should have distanced himself especially when he knows that Azmin and Anwar are in a power struggle. When Azmin was accused of the same ‘crime’ as Anwar was years ago (by Mahathir) Mahathir chose to believe Azmin even before a full investigation has been carried out. Anwar never had that luxury.

Without having blood on his hands Mahathir has plunged his knife into Anwar. 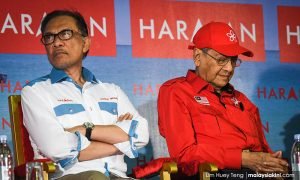 And what about the hoardings around Kuala Lumpur one hears of; showing Azmin and and Mahathir together. I must confess I have not seen it (holed up in Ward 5 as I am) but I have eyes and ears everywhere.  Isn’t this some kind of annoucement of the anointment of the next in line to the throne in Putra Jaya.

The coronation was supposed to be at a lavish banquet at the Sheraton. You see the collaborators hugging each other. Their lackeys kissing the hands of the future occupants of Putra Jaya.

Whatever they drank that night must have gone to their head. Certain UMNO leaders demanded that they be let off for putting their hands in the national till. This Mahathir could not accept. One thing you can say about the old man, he will never let you go once you have crossed him . . . and Najib has crossed him more than once.

Mahathir had counted on his heir apparent Azmin to deliver the numbers – get enough UMNO members to cross the floor to PPBM. Together with his own dissidents from PKR and those they hoped to get from East Malaysia they would, with PAS form a new ALL Malay Government. Oh yes MCA and MIC were mentioned but we know these are the water carriers – not players.

Azmin must have flunked his maths because his numbers did not add up.

Mahathir then decided to cast his co-conspirators to the sharks – Azmin and Muhyddin had to pay the price. To imagine that those two did all this on their own without Mahathir’s knowledge . . . even we in Tanjong Rambutan will not believe it.

But anyway Mahathir’s spindoctors now cast him as the saviour of the country (once again?); a principled man who would not sell the country out for his own interests. He resigned – what more can he do?; knowing full well that PKR, DAP and Amanah do not have the numbers to form a government. He knew they would come crawling back to him and like the worms they are they did. The worms are not ready to turn it would seem.

Mahathir is the master politician; Machiavelli reincarnated. He does whatever needs to be done to get what he wants.

He can bathe in the sewer and still come up smelling of roses.

He will eat the curry puffs while you get the blame; that’s Mahathir for you.