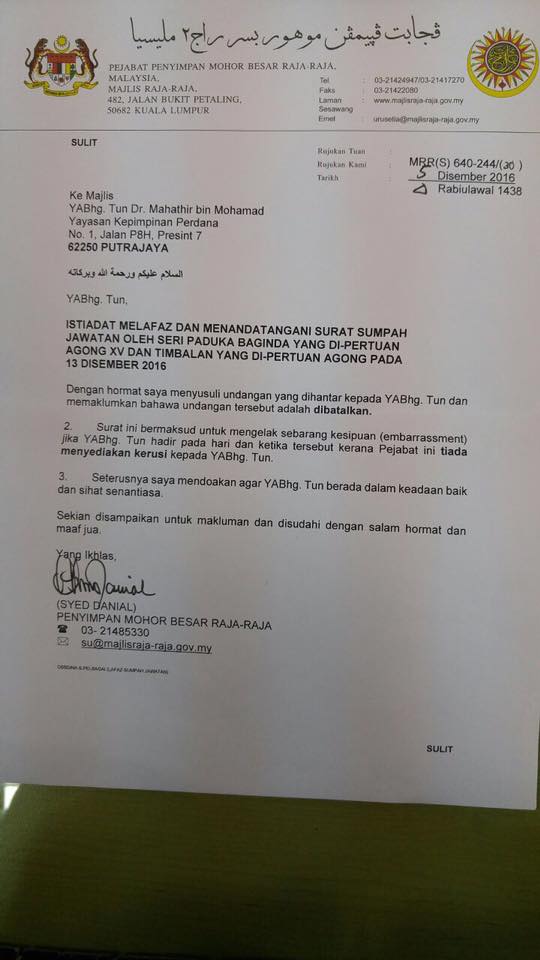 Former PM, Dr Mahathir Mohamad’s invitation to attend the installation of the next Agong on 13 December, at the Istana Negara, Kuala Lumpur, has allegedly been withdrawn.

Here are the letters, one to TDM and a copy to Dr Siti Hasmah (see below).

They are allegedly from the office of the Conference of Rulers, and signed by the Keeper of the Rulerâ€™s Seal, Syed Danial Syed Ahmad Syed.

Mahathir’s aide informed Malaysiakini that the said letters, dated 5 December, had been hand-delivered to the Perdana Leadership Foundation office in Putrajaya yesterday.

The letters may be marked “Confidential”, but you may view the letters here, as it is making its rounds in social media.

This issue cannot be swept under the carpet.

We may not agree with Dr Mahathir’s politics, but any former head of state should be accorded the respect due to him.

The Palace is above politics… so IS this Umno-Baru’s doing, because Umno-Baru controls the privy purse. Umno-Baru also composes the speech for Agong opening parliament,

If this is allegedly Umno-Baru’s doing, then the party which claims to protect the Malays, and to defend Islam is stooping low…very, very low indeed.

You don’t see Tony Blair or other former PM, refused an invitation on Armistice Day do you?

This time, those who are desperate to shame Dr Mahathir have gone too far.

The palace is above politics. This will backfire on Umno-Baru.

In other words, Umno-Baru will be humiliated, in attempting to drag the palace into politics.

It would be interesting to hear the comments from the office of the Keeper of the Ruler’s Seal. Or from any official representative of the rulers which comprise the Conference of Rulers

The Deputy Agong is the Sultan of Perak, Sultan Nazrin Muizzudin Shah.

Sultan Muhammad V of Kelantan will be installed as the new Malaysian King, on 13 December.

In the end, it is NOT the rakyat, which has failed Malaysia. 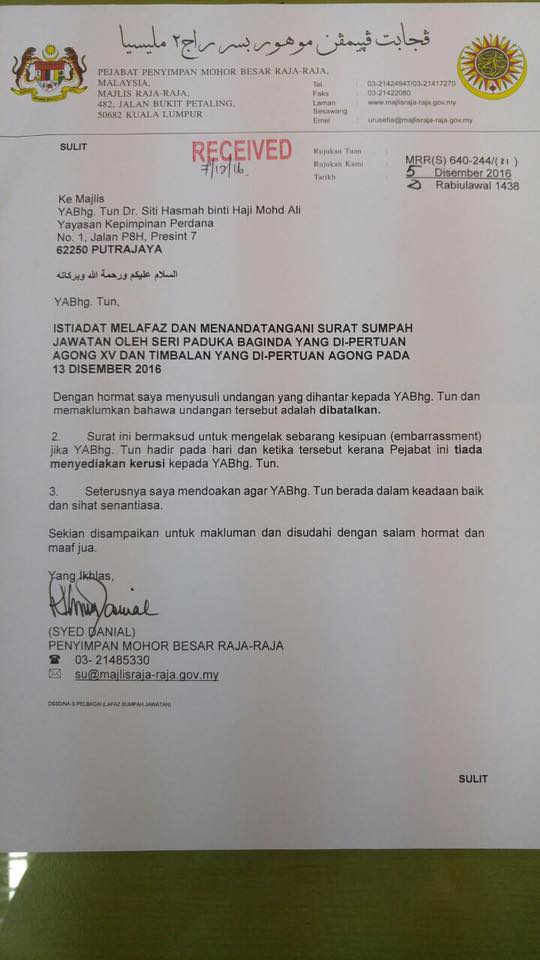