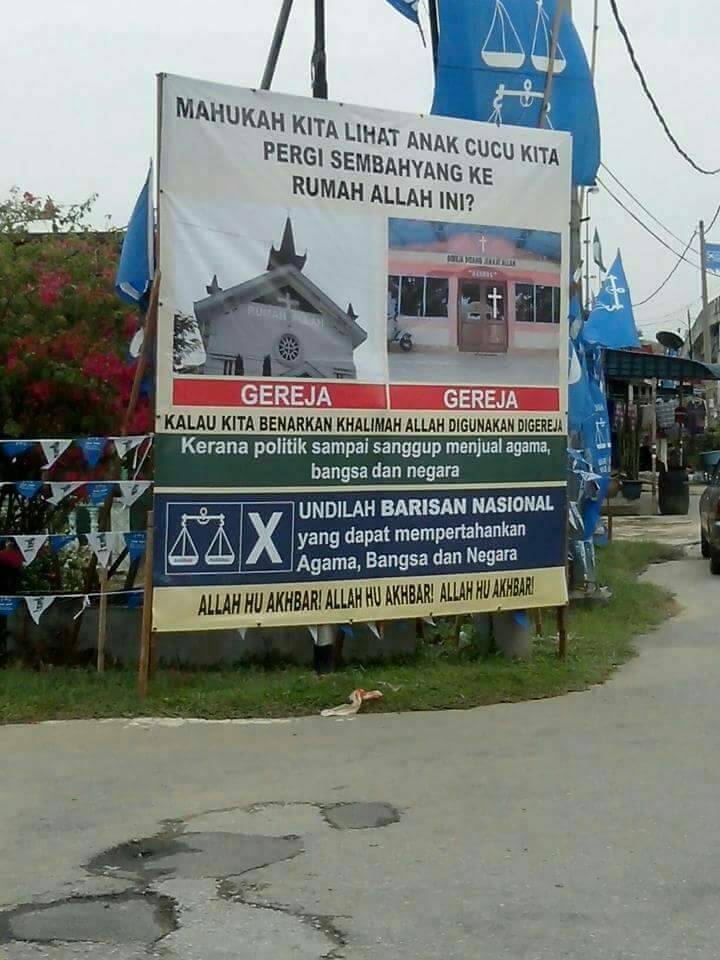 The Centre for Human Rights Research and Advocacy’s CEO Azril Mohd Amin has called for the ban on Christian evangelicalism (sic).

His reason is that 400 Muslims have converted to Christianity (FMT July 4th). This is curious, coming from a Human Rights agency. Surely it is part of everyone’s (human) rights to profess the faith of his choice. Surely as a human rights activist and (I assume) a good Muslim he should encourage freedom of worship in the spirit of the Koran: “There is no compulsion in religion – the right way is indeed clearly distinct from error (2.256), “The Truth is from your Lord; so let him who please believe and let him who please disbelieve” (18:29), “Clear proofs have indeed come to you from your Lord: so whoever sees, it is for his own good; and whoever is blind, it is to his own harm. And I am not a keeper over you” (6:104). (The italics is mine).

There are many more statements that testify to the belief in freedom of worship in the Koran, or at least, to non compulsion in religion. We don’t hear much of this, I wonder why?

However, if Avril had cited the Constitution he would have been correct in that it is forbidden to preach other religions to a Muslim. I take it this is based on political and not religious reasons. Nevertheless it is the Constitution and we must all obey it.

How did Azril come about the figure of 400? Why not 4000? And how is evangelism a threat to national security? What constitutes evangelism, other than the direct preaching of a religion?

Does having mission schools constitute evangelism? What about hospitals run by Churches – Hospital Fatimah in Ipoh, The Adventist Hospital in Penang to name two. Are they not a subtle (and therefore more dangerous) form of evangelism? Should we ban them or forbid Muslims from using them.

Lately having roof lines that appear like crosses, shophouse churches with symbols of Christianity have attracted protests by religious zealots, probably because they may cause Malays to convert.

In 2006 a SMS received by a member of Sisters in Islam (SIS) “alleged that the Mufti of Perak had disclosed that approximately 600 Muslim students of the Ungku Omar Polytechnic who were converted to Christianity were to be baptized by Datuk Azhar Mansor.” (SIS newsletter – 2006).

This led to protests (according to the newsletter) by several hundred Muslim protestors from political parties and Muslim NGOs who gathered outside the Church of Our Lady of Lourdes in Silibin.

None of this is true and SIS expressed its outrage at the rumour and the protest.

Azril has not said how or when and where the conversion of the 400 hundred took place.  How credible is the CEO of Centhra?

There are too many people crying wolf. I wonder why? I also wonder why this is largely against Christianity (not Buddhism, not Sikhism, not Hinduism). Is  Christianity such a threat to Islam?

The Graha Maria Annai Velankanni in Medan is described as “One of the Most Unique Churches in the World” according to a travel blog. It had elements of all religions.

From afar it looked like a temple. The church was officially opened by the Governor of North Sumatera, a Muslim. It sits in the middle of a kampung which is predominantly Muslim. The church hall is open to all religious groups to hold their functions.

Also in Medan is a huge Buddhist temple complex stretching a couple of kilometres on a major road.  There were no protests to its construction. By and large, Indonesians are more tolerant of other religions. They seem to have a maturity, self confidence our people lack.

The Way We were

Although Islam had always been an important part of the Malay upbringing, there was acceptance of other races and religions. This was most evident pre 1970.  Then, there was a more liberal and laissez faire attitude among the Malays themselves towards religion and religious rituals. Many Malays (especially in the urban and semi-urban areas) went to Mission Schools and there was a greater mixing of the races. Malays visited their non-Malay friends in their house and partook of drinks and food, confident that their religious requirements were respected by their non-Muslim friends. Malays, Chinese and Indians ate together in coffeeshops.

Our first prime minister, Tunku, when criticized for drinking and going to the races, was said to have replied that he was answerable to Allah only. But the Tunku was not the only Malay who drank or went to the races.

There was even a Guinness Stout advertisement in the Malay Teachers Union magazine. Most Malay women did not wear the tudung and Malay girls played sports like girls from other communities. Religion was considered a private matter between the believer and his God – it was not imposed from without.

Today the Tunku would have been condemned as a bad person and prime minister. But did the Tunku steal from the country or recklessly squandered the country’s wealth on speculations and propping up failed companies of relatives and cronies?

For all their religious posturing, do our ministers today have more integrity than those in Tunku’s cabinet? And are the tudung clad women, and goateed men today, with all their outward observance of rituals, more pious than their grandmothers and grandfathers.

We used to be a liberal and tolerant country, so what happened? How did we become the narrow minded, intolerant, country we are?