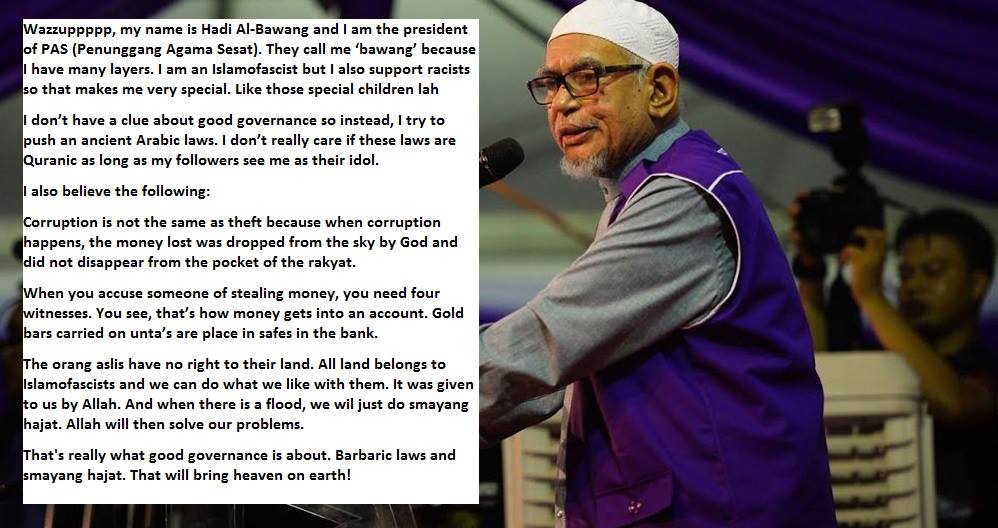 If you wanted to understand the meaning of populist, superficialist politics, you need not look any further than PAS.

Their version of politics is what the Malays would call ‘cetek’ and ‘dangkal’ (without any depth). Rather it is an emotional brand of identity politics. ‘We are Muslims and we deserve to have Islamic (sic) law’, they rant on and on.

In this present era of weak governance by UMNO, complicity by PAS becomes a necessity. UMNO needs PAS to bring in Malay support (by PAS leaders shamelessly downplaying UMNO’s misdeeds) or at least split the opposition who, to be honest, need a dose of dignity.

PAS’s gathering at Padang Merbok last Saturday was hardly a political rally. It looked more like a rock concert!

As far as political analysts tell us, they hardly had any support from the KL-ites themselves which means they had to bus in participants from their heartlands. It was a great day for a picnic, presumably. All they had to do was to listen to some boring sermons and yell ‘Allahuakbar’ when prompted to.

If you see the videos, it looks as if a good number foreigners were roped in as well. All in all, a great day for opportunists.

And to end the day, in true elitist form, VVIP’s like Jamil Khir (currently being sued for 20 million for embezzling money from orphans, how Islamic is that!) were treated to lavish meals.

King of Religious Comedy turns up

The aforementioned sermons had some religious rock stars in them, not least of whom was Azhar Idrus himself, the Malaysian king of religious comedy.

Azhar thinks of Syariah as necessary because he sees religious authorities as parents who help save children from themselves! This exposed his authoritarian pretentions, but his analogy fails because we are not children. We have our rights which PAS wishes to infringe because they don’t know what good governance entails.

The strange thing is, whenAzharIdrus was asked if these laws are not actually hudud laws since they are equivalent to ‘Quranic laws’ (in the Islamofascists’ reading) he actually agreed that they were!

Unless Azhar Idrus was inebriated at the time, he is admitting that PAS is trying to efface the Federal Constitution. I would accuse the man of treason but one needs a competent mind for that.

Worse than that, the example mentioned (40 lashes for imbibing alcohol) is not in the Quran!

One would expect Azhar to know this but he was clearly ignorant of the fact. Having watched his video for years, I actually know the extent of his ignorance about the Quran so I was not surprised at all.

Azhar was in his element today. A joke here and there and he was their golden boy.

Perhaps the most shameful part of this shambolic political rally was the use of children.

Legally speaking, children are not allowed at such rallies but what did PAS care? They used children the last time they needed to drum up support for RUU355 as well. Children are simply human fodder, to be brainwashed into doing whatever the PAS head honchos tell them to. 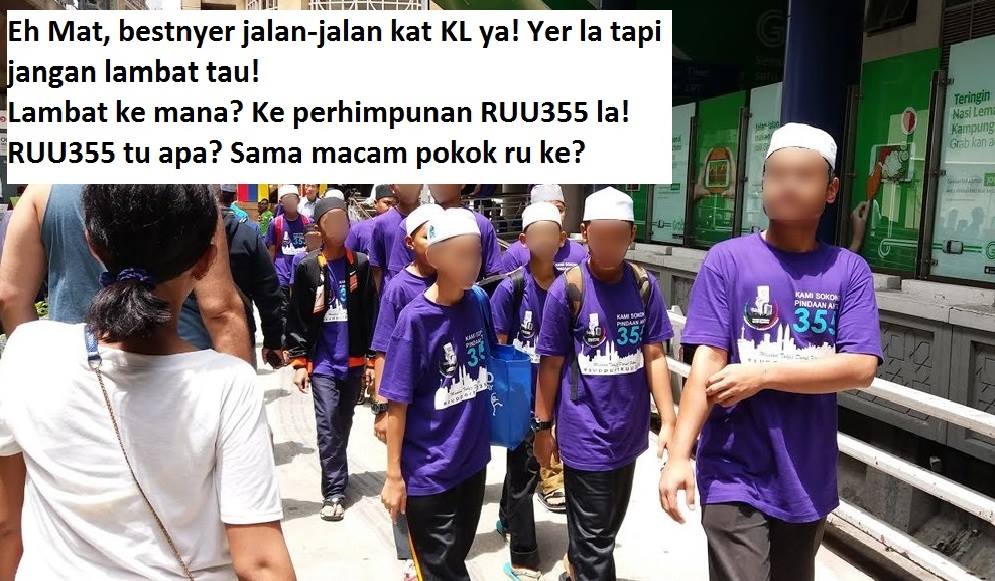 Hadi is scared of open dialogue

Will the RUU355 tabling succeed? I personally cannot see it happening because of our East Malaysian allies. They are standing firm against Islamofascism and we can count on them.

However, PAS and their followers remain a threat to the fabric of society. Unable to engage in actual governance, PAS thrives on these superficial ideas of ‘religious law’.

They have never given specifics of these laws and nor can they, having no precedent for such a thing in classical Islamic law. The enforcement of these laws will be given to sadistic, power crazy officials who routinely abuse people, even married couples like JAWI officers did last week. Can you imagine, people like these will be given greater powers!

It is no secret that when Hadi comes to London, the meetings organized are very hush hush. Only his supporters are allowed.

People like him will not have open dialogues and that shows the cultish nature of PAS.

I ask the rakyat, write to your local MPs using this template and let them know – we say NO to syariah law!