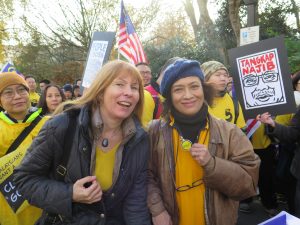 Bersih 5 supporters in Sydney are also a casualty of the crackdown on Bersih 5.

In a bizarre twist of fate, just before filming the “Hello Australia” video clip below, Clare Rewcastle-Brown, of Sarawak Report, revealed how she had escaped being extradited to Malaysia.

She had been due to visit Sydney, Australia, and offer moral support to the Bersih 5 marchers there, before visiting Singapore on the return leg of her journey.

Days, before she was due to fly to Australia, she heard, from a variety of different sources, that the Malaysia authorities knew that she was to visit Singapore and were stepping-up existing extradition requests.

In Singapore, she had been invited to deliver a keynote speech to the conference of The Association of Certified Fraud Examiners, based in Texas. The conference, starting on Monday, 21 November 2016,  would have discussed issues pertaining to financial fraud.

More importantly, she stressed, the conference organisers were keen to learn from her. She said, “They were interested to hear about the role of a jobbing journalist in the structure of checks and balances we have constructed to ensure as much as possible a fair and open, law-abiding system.”

When asked on what grounds the Malaysian authorities were going to extradite her to Malaysia, she said, “Does it matter? They can come up with any charge they like, or some made up offence.

“Malaysia no longer seems to run according to normal procedures or established legal processes.  For exposing 1MDB I have been ‘charged’ with ‘activities detrimental to parliamentary democracy'”.

Not wanting to inconvenience or embarrass her hosts, by getting them tangled up in the nonsense, and also not to waste her own time, Clare decided not to travel to Singapore.

Stressing the importance of the conference, Clare said, “It seemed appropriate for me to address the gathering as 1MDB has been dominating news, especially in Singapore, where the court case against BSI bankers, who had been charged for their alleged role in laundering money for Jho Low and 1MDB, has been in session for the past three weeks.”

After the cancellation of her trip to Sydney, Clare expressed sorrow that she was unable to go and meet the Bersih 5 supporters, but said she “would join them in spirit and send the Sydney Bersih 5 rally-goers a message.”

The message is on You Tube, and is the film called “Hello Malaysia. In solidarity with Bersih 5”.

If her trip had been on, she would have told them; “Bersih is one of the most important and positive developments in Malaysia; all the stronger as it is not based on race, party or religion, but on universal principles of freedom, the rule of law and equal justice for everyone.”

This is Clare’s message to Najib, “Is it really worth it, now you’ve been rumbled?”

Clare’s words of encouragement to Malaysians are, “If you don’t stand-up for yourselves, you could lose everything to a bunch of crooks.”