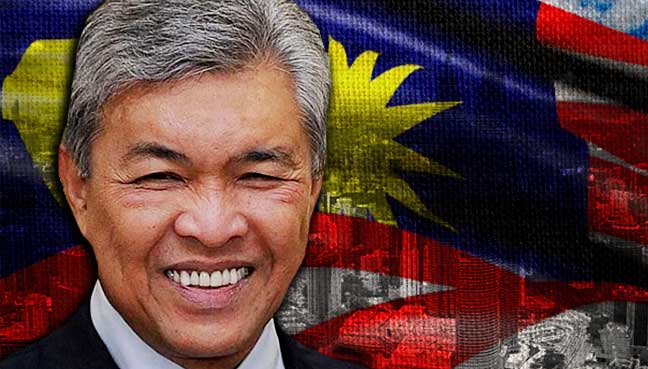 Around the time of the Umno-Baru General Assembly, a “fake” letter, allegedly written by Zahid Hamidi, urging BN MPs and senators to force Najib to resign, was apparently being circulated.

In it, the ambitious Zahid proclaimed himself PM and made Khairy Jamaluddin, his deputy.

Who would make a good DPM?

Zahid and Khairy are like chalk and cheese. Was Khairy made DPM to appease the rakyat?

Here are the choices:-

If Ismail Sabri were to become DPM, copy cat malls would emerge throughout Malaysia, just like with Low Yat Plaza II. Ismail has a fondness for turtle eggs,  and conservation would die out, along with the turtles.

Nor would you want Ahmad Maslan to be the DPM. Nasi goreng Ã  la Ahmad Maslan, which is fried rice with lavish cucumber trim, would replace nasi lemak, as our national food.

Having replaced Najib Abdul Razak, Zahid would not want emotionally affected politicians, like Hishamuddin Hussein, Najib’s cousin, in his Cabinet.

Unbeknownst to many, the tall, dark and handsome Khairy is also the most talked about man in “mengaji and agama classes” (in-depth learning for Koran at home). The middle-aged Malay tai-tais – the ladies who lunch, most of whom come from Taman Tun Dr. Ismail, drive their ustazs up the wall. Poor ustaz cannot stop them chattering about Khairy, during their lessons.

With a Treasury strapped for cash, Zahid could trim his Cabinet, with Khairy holding four ministerial posts.

Khairy could continue as Sports Minister, on account of his skills on a polo pony and his ambition as a wannabe ASEAN athlete.

With his impeccable English. Khairy could prevent embarrassing translations of Mindef documents, such as the “poking eye clothes” incident. He could  hold a rifle, and jump out of an aeroplane. He should make a good Defence Minister.

Having benefited from an overseas education, Khairy could also be Education Minister, and reinstate funding to send students to overseas universities.

Zahid would get more things done as PM

So what’s wrong with Zahid as PM? He brings out the best in Malaysian politics and has many fine qualities.

Yesterday, Najib dismissed the contents of the “fake” letter, and blamed the Opposition for underestimating the loyalty of Umno-Baru members.

This is where Najib is wrong. Loyalty is Zahid’s fortÃ©. The greasy pole of politics is not difficult to climb, if you know how. The enemy is not the Opposition. The enemy is within.

During the late 1990s, Zahid was loyal to Anwar Ibrahim, who was DPM at the time. Zahid pestered the then PM, Mahathir Mohamad, to answer allegations about corruption. When Anwar fell, Zahid became the Mahathir’s sidekick and swore loyalty to Mahathir. Mahathir is now a nobody, whilst Zahid has become Najib’s right-hand man.

If Zahid becomes PM, his first duty would be to sack the IGP for incompetence. Despite having all the resources at his disposal, Malaysia’s top policeman cannot even locate and arrest a fugitive convert father.

The IGP, prefers to tweet rather than put men on the streets. He could tweet his followers, and ask for the public’s help to find the whereabouts of Mohd Ridhuan Abdullah, who is charged with kidnapping his seven year-old daughter from his former, wife, Indira Gandhi. Why hasn’t he done this?

In the war against crime, Zahid knows who to turn to. In the past, Zahid considered the Tiga Line Malay triad as his friends. As it takes a thief to know another thief, Tiga Line gang members will make the best law enforcers in Malaysia.

With Zahid in charge, work for translators will increase. When he goes overseas, he can be like President Putin, of Russia or President Xi Jinping of the People’s Republic of China, and use translators.

An event always looks more prestigious and important, when translators are present. Waiting for a translator would also give Zahid more time, to cook up a good answer, if he were to be asked a tricky question, in front of the world’s press.

You’ve been to supermarkets with signs displaying “Buy One, Get One Free” (BOGOF). Zahid’s gobby daughter, who does not shy away from controversy and once blasted MAS stewardesses for being too old, would make a good guard dog, to protect her father’s reputation.

If President-elect Trump can elect family members to plum positions, why not Zahid? After all, 1MDB was also a family affair, with step sons helping themselves to the taxpayers’ money.

Anwar was deposed by Mahathir, as was Musa Hitam. Muhyiddin Yassin was sacked by Najib.

So is the post of DPM a poisoned chalice? Not really.  “The Chosen One”, aka MO1, has lifted the curse from the post of DPM.  Timing is all important and smart DPMs must strike when the going is good.