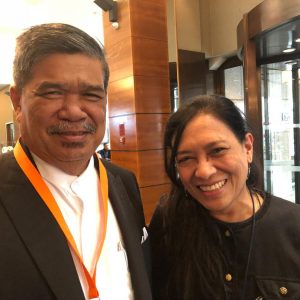 What’s the difference between Mohamad Sabu the opposition politician and Mohamad Sabu, the defence minister?

Answer: Mohamad the minister has lost weight, is turning grey, and is surrounded by a retinue of minders, but inwardly, he is still the same man: full of humility, down-to-earth, factual, calm and as funny as ever.

When Mohamad the former PAS and now Amanah politician visited London a few years ago, he was in the then-opposition coalition.

He stayed in bed and breakfasts, and gave talks, arranged by overseas party faithful, held in the cheapest community centres, often off the beaten track.

Before some of you run him down, he was in England as part of a PAS effort to raise funds for the victims of Kelantan’s worst flooding in 2014.

In the past, no one in the opposition had it easy. They scrimped and saved for their own flights, and in most cases, were given the use of spare rooms in houses of the party faithful. They used public transport, or were ferried around by party members, provided they were not working on the day.

Last week, Mohamad was in London to attend the Farnborough Airshow to invite British and other European defence companies to the Langkawi International Maritime and Aerospace Exhibition (Lima), an event held every two years. This time, the reception, accommodation and transport were overwhelming.

One night, he met the Malaysian diaspora in London. Unlike previous Umno-Baru ministers, who would arrive late, Mohamad and his entourage were early.

The minister joked that he had never been to Malaysia Hall before, as he was not welcome there in the past.

Only a handful of students would dare to attend his talks before, but last week, Malaysians piled in to listen to him. The room filled to capacity, quickly, and many were forced to listen from outside

Mohamad said Malaysians should be proud that a change of government had happened without bloodshed. He thanked the people for their decision to force change.

On the right track

With the potential to make Malaysia an ‘Asian tiger’ again, and with the help of his peers, Mohamad said that they would work hard to put Malaysia on the right track.

To loud applause, he said that in the 14th general eelction, he had won the most votes by a Malay politician, but he warned Malaysians to work tirelessly to fight racism.

He joked that TV3 would feature him on a daily basis, unlike before GE14, when he would never be seen on air. He also said he warned his wife not to get carried away with earrings and handbags.

Issuing a reminder that pockets of the community are still trapped by issues of racism and religion, he then confirmed that the administration of Dr Mahathir Mohamad was going to investigate a number of high-profile deaths – ranging from Altantuya Shaariibuu, Kevin Morias, Hussein Najadi, Teoh Beng Hock and many others.

He also touched on the cancellation of various megaprojects.

Mohamad said it was easy to talk about tackling corruption, especially as the Harapan administration was only two months old, but stressed that any minister involved in corruption would he kicked out in 24 hours.

He urged Malaysians to criticise him and his peers if they stray off track or do not fulfil any of their promises, but not to indulge in creating fake news.

In his speech, Mohamad – with great relish – also talked about former political enemy Mahathir, who had locked him up twice under the Internal Security Act 1960.

Once a critic of Mahathir’s megaprojects, he pointed out that the difference now was that Mahathir’s projects such as KLIA, KLCC and Putrajaya were at least visible. On the other hand, despite RM42 billion being poured into 1MDB, no one could see the progress of the project, one aspect that failed to impress rural folk.

Mohamad marvelled at his boss’s punctuality, his attention to detail and his stamina, which shamed most of the younger ministers. Many of them were reluctant to admit tiredness, especially as the 93-year-old did not show signs of fatigue.

He even praised Mahathir for being a changed man – a progressive, even – who dismissed public fears of ministerial posts being given to non-Malays, especially those from DAP.

Mohamad also wondered how many billions of ringgit were stashed in the homes of other former ministers.

Nevertheless, he urged people with information about corruption to contact the office of Ambrin Buang with their concerns and to prompt an investigation into the scandals.

Praising his one-time cellmate, Lim Guan Eng, who managed to reduce Penang’s debt when governing the state, Mohamad was confident of the finance minister’s ability to attract foreign investors and reduce the RM1 trillion national debt – especially as frugality is one of his traits.

Or as Mohamad described it, Lim being kedekut (stingy).

His new deputy Liew Chin Tong, was described by Mohamad as a man with a sharp mind and not one ounce of racist sentiment.

Racism being one of his main concerns, Mohamad urged the audience to support good leaders, be they Malay or non-Malays. He reiterated that there is no excuse to retain non-performing and ‘bad’ Malays, just because of their race.

BN lost the May 9 polls, he said, because they were awash with money, while Harapan won because they had very little cash – in his case, most of which he had to borrow from friends and colleagues. But the winning factor was the goodwill of the rakyat and their spirit to force change.

Perhaps organisers of the talk did not realise Mohamad’s appeal and the respect Malaysians have for him, when they only arranged a small room for it to be held in.

And perhaps many audience members did not realise that Mohamad is in charge of the nation’s security, what with the many long-winded questions and statements addressed to the wrong minister.

Oh yes! Ever since they were introduced decades ago, I find it difficult to accept a doa recital at the beginning of every talk. Keep religion out of lectures.

If Muslims want a doa, then the other faiths should also be catered for, but then every event would be much, much longer.