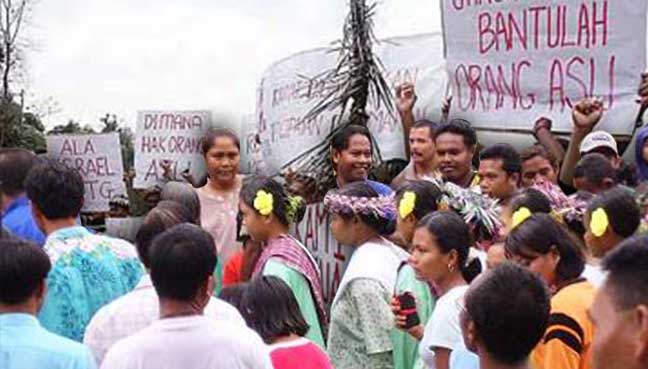 The Kelantan Menteri Besar, Ahmad Yakob, claims that the Orang Asli (OA) are NOT marginalised. Either he does not know what is happening on the ground, or his advisers are selective with the truth.

Ahmad thinks that gazetting 973 hectares of land as reserve for the OA and a further 19,000 hectares to roam around, should appease them.

Despite Malaysia having the “best education in the world”, the government cannot provide the most basic primary schooling for the Orang Asli.

After 59 years of independence, the socio-economic conditions of the Orang Asli community has not changed as much as the other communities in Malaysia.

i) People who are involved in the welfare of the Orang Asli have revealed that at one time, there were primary schools in Orang Asli villages, so that young children need not board, in hostels. The government made a U-turn and said that it was “not economically viable” and the provision was stopped.

ii) Another allegation, is that the teachers who are sent to the hostels, are those who have been disciplined, and were transferred to the remote schools, as punishment. If the allegations are true, these teachers are likely to take-out their angst and frustrations, on the children.

Abuse of children who board

OA children are forced to enrol in boarding schools, away from their hamlets in the interior.

Remember the 7 OA children who had been allegedly abused and then ran away from SK Pos Tohoi, near Gua Musang in Kelantan?

They lived in squalid conditions. Children slept on bare concrete, and wore dirty uniforms. They only had three days of lessons, per week. A school cannot be run on a part-time basis?

Despite efforts to search for them, five died from hunger and two were found close to death. The children were yards from the school and it brings into question, how good the search party team was like. There was a delay of a fortnight, before the search party was sent to look for the children.

If the children risked life and limb, by escaping to the jungle, they must have been so traumatised at the hostel, that they were prepared to seek refuge in the jungle, rather than return to school.

Converting to Islam is treated as a financial transaction

i) The MB also failed to mention the attempts at converting the OA to Islam. Muslim preachers are encouraged to marry OA women, and their reward is to be given a 4WD, free housing, RM10,000 incentive and a monthly RM1,000 allowance. Kelantan practicies bribery and corruption, whereas religion should be a choice, not a financial transaction.

ii) A few years ago, a teacher slapped four Orang Asli children because they could not recite the doa. Conversions of Orang Asli children are strictly prohibited and yet teachers force their charges to recite Koranic verses, with impunity. The incident sparked public fury.

On June 30, FMT published a report about a young Orang Asli girl, Siti, who had been beaten by three male teachers. They tied her up, beat her, and kicked her thigh, because they suspected her of stealing. The girlâ€™s grandmother was threatened, by the headmaster and other teachers, and warned not to lodge a police report. A friend of one of the accused teachers claimed he had â€œconnections with the police,â€ who would make it tough for Siti, to get justice. So, were the teachers, Saki, Arif and Salib ever punished?

Plight of the Orang Asli continue to this day

The OA are under constant threat from the government and big corporations, a problem also faced by their cousins, the indigenous people of East Malaysia.

The Orang Asli are turfed-out of their ancestral homelands, and denied their basic rights, because companies need the land to mine, to convert into oil palm plantations, to construct airports, and build refineries and dams. The government always reneges on the promises to resettle the Orang Asli.

The Orang Asli live off the land. They forage, hunt and source jungle produce to sell. They are shift cultivators and in some cases, they follow the migration of animals, in the jungles.

They are normally resettled, in dingy, dilapidated shacks, not the homes that they were promised. The land they are given is usually barren, and far removed from the source of their income  in the jungle.

A study conducted five years ago, alleged that 50 per cent of the Orang Asli are illiterate, 39 per cent have only primary school education, 62 per cent drop out of school annually, and 94 per cent do not continue their education after their Sijil Pelajaran Malaysia (SPM).

The problems faced by the OA are just the tip of the iceberg.

i) Last year, the Deputy Education Minister, P Kamalanathan, was shocked to learn that there were no female teachers in SK Pos Tohoi. What happened to standard operating procedures for teacher placements in hostels, especially as there are girls amongst the pupils?

ii) The Education Minister, Mahdzir Khalid’s, knee-jerk response, is to ferry the Orang Asli children home, to their parents, every fortnight.

Does he recall the plight of the young Penan girls who were raped by the drivers of the logging companies, with whom they hitched rides to their school? Can he guarantee the safety of the Orang Asli girls?

A minister, who is a bigot and accuses Christians and Jews of dividing the Malays, is not fit to be a role model for Malaysians. He has shown no remorse for his ministry’s incompetence. He is unfit to be the Education Minister!

Both Umno-Baru and PAS have failed the OA.