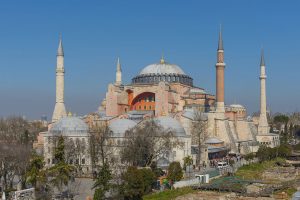 Have you been to Turkey and visited the Hagia Sophia, in Istanbul?

This beautiful work of architecture is a showpiece of the Byzantine and Ottoman Empires.

The Hagia Sophia was first an Ottoman church, then a Byzantine mosque. It is now a museum, but none of the Turkish leaders have demanded that the Orthodox Christian parts of the Hagia Sophia be fenced-off from view, in case they offend Muslim visitors.

So, when Penang Opposition Leader Jahara Hamid demanded to know why a Taoist Datuk Kong shrine had been retained, in the recently refurbished Armenian Park, she confirmed our fears, that the Umno-Baru Malays are a very confused group of people.

Although Jahara said that Muslims will not pray at the shrine, she claimed that some Malays could become confused. She wanted the shrine to be moved to an obscure corner of the park. Other Malays have neither noticed nor been bothered about the shrine, which has been in the park for the past 70 years.

My aunt lives beside a church. She can see the cross from the windows on one side of the house. Was she confused by the cross and think that she will be converted and feel the urge to attend Sunday service? No!

Another relative lives beside a Buddhist temple. When the wind is blowing towards his house, the smell of joss sticks is strong. Is he confused by the smell or the other rituals which are associated with the temple? No!

Many members of my family are products of Mission schools. We probably know the Lord’s prayer by heart, but are we confused? Did we feel the urge to convert? Absolutely not!

The IGP’s brother, claimed to be the mediator, to pacify a group of extremely agitated Muslims, who had demonstrated outside a church, in Kampung Medan. Apparently,the cross on top of the church had confused them and would convert them to Christianity. Unsurprisingly, we are not confused by the IGP’s brother’s role.

The Langkawi exco, who demanded that crosses be removed from the roof tops of houses in Langkawi, needed a trip to the optician. These “crosses” were airwells, and designed to naturally ventilate the house.

The East Malaysian bumis, like the Kadazan and Iban, pray in Malay and read from Malay language Bibles. There is no confusion. However, if they were to refuse to speak the national language, the Umno-Baru Malays would accuse them of being unpatriotic. Are Umno-Baru Malays ignorant or just plain stupid? Or both?

I have met thousands of smart Malays, young and old, urban and rural, western educated or those who have yet to travel out of Malaysia. None have been afflicted by the same confusion and paranoia of the Umno-Baru leaders.

Easily confused Umno-Baru leaders should go back to school.

Confused leaders cause mayhem and are unfit to lead. They cause chaos and ruin the economy.

The non-Malays are to be praised because they are not a confused lot. Many live beside mosques and suraus. They hear the azan, many times a day, and still retain their faith.

The debacle triggered by Jahara suggests that the faith of the Umno-Malays is extremely fragile, because they seem to descend into confusion at the sight of a temple or a cross.