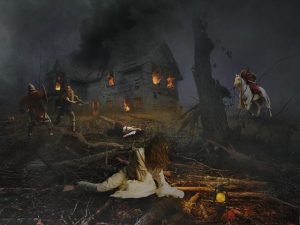 How would you feel, if a group of people barged into your garden, trashed it, wrecked your house and damaged the plumbing? Would you sit by and allow it to happen?

What if the vegetable patch was trampled on, the fruit trees felled, the chickens butchered and the fish pond poisoned. Your family’s source of food is gone.

How would you react when you find that the people who enforce the law and should be taking care of your interests, are the ones who betrayed you?

This is not a screenplay for a film, or a synopsis for a book. It has been happening to the Temiars of Kampung Cunex in northern Perak, since February this year. 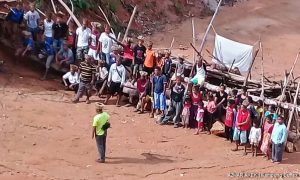 When the villagers found that indiscriminate logging had been conducted without their approval or knowledge, they erected barricades to prevent timber lorries from removing the felled trees.

On 29 April, loggers, in a convoy of lorries, dismantled their blockade, so the Orang Asli (OA)  resisted. Violence ensued and the OA were assaulted by the loggers. The loggers also issued the threat, “You had better watch your back when you next visit Sungei Siput or Grik. We’ll be waiting for you.”

The police should act to prevent a breach of the peace, by the loggers.

The villagers lodged a police report, but the police denied receiving it and no action was taken.

On 16 May, another blockade, to stop further encroachment, was demolished. This time, the loggers had the help of the Perak Mentri Besar, Ahmad Faizal Azumu, who sent in the police to help dismantle the blockade. The loggers triumphantly removed their cache of cut timber.

A few months ago, Ahmad Faizal‘s statement about logging being vital for Perak, acted like a burst dam, which prompted the logging business to forge ahead, without any regard for the rights of the OA.

The MB appears to have dismissed the OA’s assertion that the land they live in, is customary territory and they were merely protecting their ancestral land, which has been passed down for millennia.

Malaysia signed the “United Nations Declaration on the Rights of Indigenous Peoples (UNDRIP) 2007”,  and the Pakatan Harapan government has said it will enforce this declaration.

We know that those in the timber business have deep pockets and have a cable to the top. They are also well protected by those in authority. Shame on the Perak MB for treating the OA with contempt and derision.

Reluctant to fight against the authorities, and be branded as law-breakers, the OA of Cunex had little choice, but to stand by helplessly, as both the police and the loggers smirked at them. This is how the MB treats the original inhabitants of the land.

Ahmad Faizal has no clue about OA rights, or the impact of indiscriminate logging on the environment. He lacks vision and his quick method to make money is to allow logging. Perhaps, he is an opportunist MB and wants to make money whilst there are still trees to fell, before his tenure as MB ends.

If only he had a more creative team with vision, instead of the usual Umno-Baru minded mentality, who could device ways to make the state prosper and progress, in the long-run, instead of resorting to short-term, desperate measures.

When Malaysians criticised the actions of the police, Ahmad Faizal claimed that the blockade and logging activities had been conducted on state land, and that the loggers had fulfilled all of the requirements pertaining to their activities.

The director the Orang Asli Development Department (JAKOA), Juli Edo, said, “The community (erected the barricade) because of their pride and ethno-history, which links them as direct descendants of the Perak Man who lived 13,000 years ago.

“They don’t want to lose their native land, that they have inherited for thousands of years.

“This action was not to oppose development planned by the state government, but was an effort to protect their rights and heritage.” 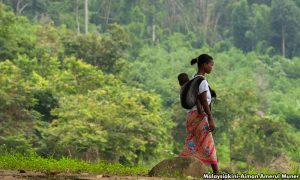 What about OA rights?

The OA are the original inhabitants of the land, but successive governments have done very little to protect their rights.

The OA need forests to be self-sustaining and to preserve their way of life. It is their culture and we should respect them, but instead we send in people to proselytise them, and to resettle them in small airless pre-fabricated homes in settlements, located  on barren land. The promises of safe potable water, electricity, schools or clinics, are not always fulfilled.

When the trees are cut, the water leaches from the land, and the water runoff turns clear rivers muddy. When chemicals are dumped into the water and the fish die, the polluted waters irritate the skin of the OA. 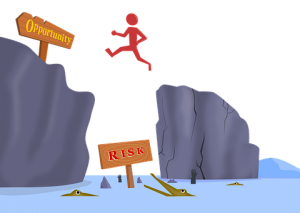 All Orang Asal are at risk

The Cunex story is a tragedy that has been repeated throughout the forests of both east and west Malaysia, and on the east and west coast of the peninsular. The Orang Asli are slowly being hounded by those who should be protecting them. The state government.

Ahmad Faizal said he was not pressured by the OA demands for the state government to approve customary rights over 12,456 hectares of forest. The customary land is part of the Air Chepam Forest Reserve in Hulu Perak, Piah Forest Reserve (Kuala Kangsar) and Government Land in Mukim Kenering, Hulu Perak District.

The MB claimed that the state government had been very lenient towards the OA, whom he said were illegally occupying the land.

He said, “This is not a cowboy country, we have laws. So if there are people freely encroaching on government land without regard to law provisions, we need to take appropriate action.

“The government must be fair to everyone. Regardless who they are (sic), we have to take action (against those illegally encroaching on the land) but we will not demolish the Orang Asli houses immediately.”

Only a callous, money driven MB with a heart of stone, would demolish the OA homes in their own ancestral lands. 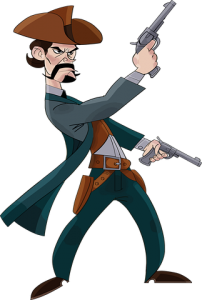 NB: This is a Center for Orang Asli Concerns (COAC) video and reproduced with permission from Colin Nicholas of COAC.