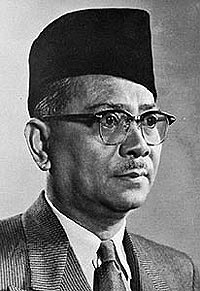 Tunku Abdul Rahman died 16-years ago today. If he were alive now, he would have wept, at the destruction of the bridges he painstakingly built, between the races in Malaysia.

In a speech to the Foreign Correspondents Association in May 1961, he warned us about a small minority who did not think, feel, believe and work for the good of Malaya.

Ironically, some Malays have let the Tunku down, whilst the non-Malays have embraced his vision wholeheartedly.

Our one and only home

The Tunku was passionate about loyalty: We, who are here, have only our little Malaya. The Chinese, Malays and others have to make the best of our home here. Malaya, our one and only home. He explained that without unity, “there would be conflict and hell will break loose”.

He would have cried, when in 2010 two school principals told their Chinese students to “return to China”. This is not the Malaya/Malaysia he wanted us to inherit.

Why are the Malays so insecure? Why do they bash the Chinese and Christians like this.

Malays control all the institutions, the civil service, the ministries, the armed forces, and yet, they want more.

The Malays are stronger without Umno-Baru, which only builds on their weaknesses and their insecurities.

What would it be like, to live in a Ketuanan Melayu Utopia with 100 percent Malay bumiputera equity, with the Chinese banished to China and the Indians to India?