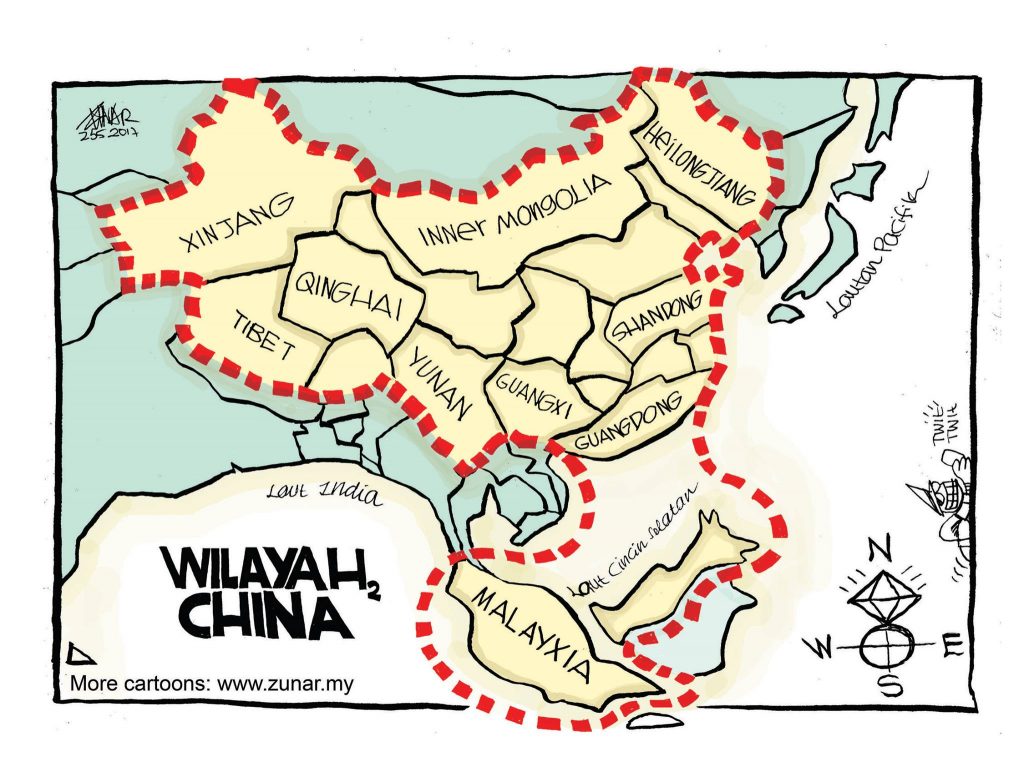 The Malays, who dislike their fellow Malaysians of Chinese extraction, calling them “pendatang” and “illegals”, denying them equality as citizens, had better look away now.

We were colonised by the Portuguese, then the Dutch and the British. The Ketuanan Melayus must be bristling with pain. Malaysia will soon be “Ma-lay-xia Province”, part of the Greater “People’s Republic of China”. The writer Howard French called Africa, China’s “second continent”.

Nobody rewrites Malayan/Malaysian history faster than our Umno-Baru historians. The pain of seeing Najib Abdul Razak hold a begging bowl in Beijing must confuse the Ketuanan types. Malaysian history will have to be rehashed, yet again.

Najib’s closeness to the People’s Republic of China (PRC) is no coincidence. He is punishing western leaders for humiliating him. Najib does not care that 1MDB closed down BSI, the 143-year-old Swiss bank and caused Coutts, the Queen’s bank, to be scrutinised.

The Global Risk Insight website reported that “two Chinese firms had launched multi-billion-dollar bailouts of 1MDB assets and had leapfrogged over Japan, Singapore and America to become Malaysia’s largest investor”.

Western leaders need trade to survive, politically. Trade will prop up their economies. When Malaysian companies invest in rundown parts of London, these areas are regenerated without the use of the taxpayers’ money.

Millionaires from the PRC, Malaysia, Singapore and Russia purchase these expensive London properties and bump up house prices. They force locals out of the area. Politicians don’t really care about affordable and social housing. The same thing occurs in parts of KL, Malacca, Penang, Johor Baru and Ipoh.

How to avoid accusations of money-laundering

Western arms manufacturers love Malaysian and third-world country despots. Leaders with blank cheques purchase missiles, weapons, tanks, second-hand planes, and second-hand submarines, as long as a middleman is involved. The middleman, usually an Umno-Baru crony, baby-sits the hundreds of millions of ringgits in commission, all charged to the taxpayer, of course.

Back to Parameswara and Najib. On his diplomatic mission to seek protection, in 1411, Parameswara impressed Emperor Yongle with gifts of ivory, gold, incense, black bears and jungle exotica. In exchange for the gifts and protection, the emperor presented him with jade and other treasures and most important of all, the emperor’s royal seal.

So, what deals did Najib do with the PRC in modern Malaysia?

The PRC refuses to negotiate with Asean in the case of the highly disputed Spratly islands. In July 2016, an arbitration tribunal, under the auspices of the UN Convention on the Laws of the Sea, backed the Philippines’ claim. Malaysia said nothing, possibly fearing Beijing’s wrath.

A few years ago, the PRC navy landed on the James Shoal islands, about 60km off the Bintulu coast. The Malaysian chief of the armed forces said, “Don’t worry lah.” The incursion was reported by the South China Morning Post but apparently our leaders were not perturbed. Remember the same lackadaisical attitude when Sulu warriors invaded Lahad Datu in 2013?

No need to worry?

Acres of land, high-end waterfront properties, landed properties, ports, islands, railway lines and the land beneath these tracks, are all under the control of PRC companies.

PRC’s bid to build the high-speed rail project between Kuala Lumpur and Singapore has been successful. The original price of the East Coast rail project rose from RM30 billion to RM55 billion.

One still remembers the 1.6km of monorail in Malacca, which kept breaking down and the millions of ringgits that were pumped into it, to try to make it work. This doesn’t really fill one with confidence.

What say the red-shirts and Ketuanan Melayu?

Najib’s cosying-up to the PRC is not just about taking advantage of China to boost our economy. It is also payback time. He is fuming because the US Justice Department (DOJ) is attempting to recover our assets from the 1MDB débâcle, and bring Jho Low and Riza Aziz, to justice.

Does Najib think that the PRC will not want political and economic leverage in the region and in Malaysia? What have the red-shirts and the Ketuanan Melayu to say?
Cartoons: Zunar at www.zunar.my