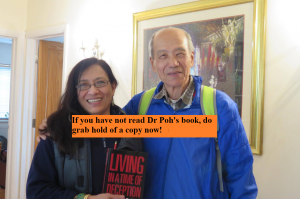 Yesterday, was the 55th anniversary of  Operation Coldstore (OC). An ugly day in Singaporean politics.

On 2nd February 1963, 133 political leaders, activists, students, and leaders of civic organisations, were arrested in Singapore. Some were detained, without trial, for over two decades.

One of them, Dr Chia Thye Poh, an elected MP, was incarcerated for 32 years.

Another was Singaporean, Dr Poh Soo Kai. He spent 17 years in jail, without trial. This cost him both his family life, and his career in medicine.

At the launch of his memoirs, “Living in A Time of Deception”, on May 2016, Dr Poh said (2:02 min); “What we are living with today, is the fall out of the failed Malaysian merger plan”.

Are Singaporeans and Malaysians aware of Operation Coldstore? What is its significance for them?

Both countries are gripped by a culture of fear. Some Singaporeans point to its success as a first world nation; but as the last video shows, Singaporeans appear to be free, but are they? They appear to be corruption free too.

View the videos below. Reach your own conclusions.

(Shocker: In the main video, go to minute 26:26 and Dr Poh’s allegation about interference in Malaysian affairs, for economic purposes.)

Not many people are aware of the presence of the American navy in Singapore.

Oops…same as in Malaysia. Even Yap Ah Loy has disappeared from our history schoolbooks.

Laws are passed so that politicians can legalise their actions. All above board. Really?

(NB: (i) All videos have been reproduced with the kind permission of Monsoons Book Club.

(ii) Please subscribe to my video channel, so I can continue to make more insightful videos.)