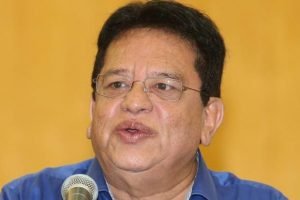 Shifty… that is what most people will say about the Federal Territories’ Minister, Tengku Adnan Tengku Mansor.

He is a public servant, but seems to have forgotten this important fact.

The Star Online, in an article, said that KuNan, as this wannabe prince from Aceh is affectionately called, has refused to publicly declare his assets.

He said that if he were to do so, his wife and kids would be targetted by kidnappers and his family may be robbed.

What does this remark suggest to you?

Many things, according to various people, who were asked for their opinion.

It implies that he is super wealthy and does not want to disclose his true wealth, just in case someone does a comparison with his monthly gaji and what he owns.

Another person said that he has something to hide.

A retired civil servant asked if KuNan does not have faith in our policemen to guard him and his family, because ministers have increased security than most people.

A student in a local university said that KuNan’s declaration couldÂ  be an eye-opener. He added, “Once KuNan discloses his true wealth, the rakyat may demand to know the assets of other Umno-Baru politicians.Â  KuNan’s peers have probably warned him to withhold this information, so that they will not be forced to do the same.

“If KuNan had nothing to hide, why make an issue of it? He has increased our curiosity, the fool.”

KuNan was responding to the PKR communications director, Fahmi Fadzil, who urged KuNan and city mayor, Mohd Amin Nordin Abdul Aziz, to publicly declare their assets and show commitment to the principles of transparency.

KuNan’s response showed his arrogance and fears about being scrutinised by the rakyat. He said, “I declare my assets directly to the Prime Minister every year.

“I used to be a businessman and have a lot of assets. I am also afraid if I declare, my children and wife may be kidnapped, people could rob us – anything can happen.”

KuNan forgets that he is answerable to the rakyat.

His response makes him appear more shifty that he already is. What is he hiding?

This man, is not interested in giving the rakyat the confidence that ministers and Umno-Baru politicians are “clean”, and do not have any dealings which show conflict of interest.

It is obvious that the government of Najib Abdul Razak, does not practise what it preaches. It is not transparent and its members are more interested in looking after their own interests, rather than the interests of the rakyat.

Come clean KuNan! Surely you have nothing to hide and all your wealth came through honest means.