Why is the Deputy PM, Dr Wan Azizah Wan Ismail, making a fool of herself and speaking-up for prime-minister-in waiting, Anwar Ibrahim?

A few days ago Anwar said that he was willing to wait before becoming PM. Did he prompt his dutiful wife? 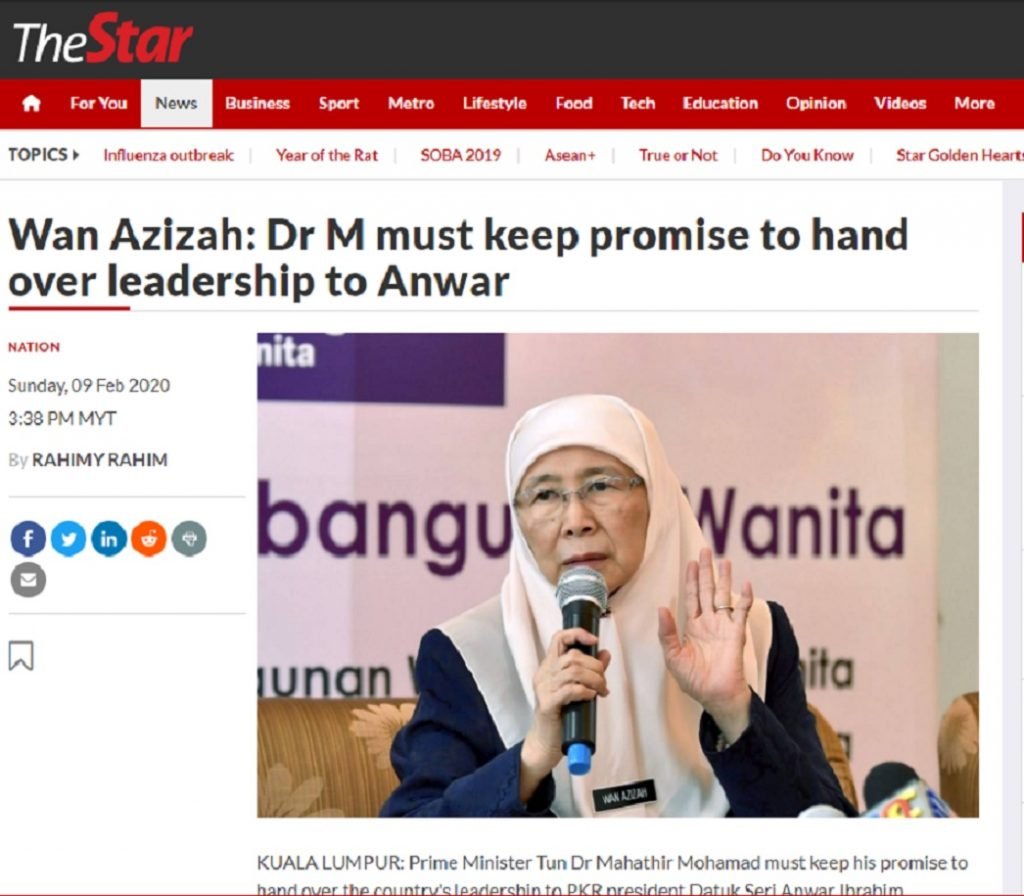 Anwar should fight his own battles.

He has a lot of housekeeping to do. Ever since his release in 2018, he rubbed the rakyat up the wrong way. This nation needs to heal, to eradicate corruption; but Anwar keeps harping on about becoming PM.

PKR is also known as “Parti Keluarga & Rakan-Rakan”. We thought we voted for change!

The threat of nepotism means that many very good people will not want to work for the party. They know they will not progress far. Few people are prepared to criticise the boss’s wife or daughter.

If Anwar cannot contain the two factions in his party, what chance has he got of uniting a divided Malaysia? He was also an architect of this division, in the 80s and 90s.

Ever since his release from prison, it started with ….”I am going to be PM…. then, When will I be PM? Now it is, Fulfil the promise…

The nation is struggling to get back on its feet. Our focus should be on Mahathir Mohamad to ensure he does his job.

Mahathir must correct his mistakes that he started decades ago. Anwar is distracting us.

We cannot be sidetracked, but the rakyat’s attitude to PMs must also change. Let’s  stop being in denial (see end).

At the time, Anwar  told England’s newspaper The Guardian that he would “root out corruption and END a system of affirmative action for ethnic Malays” if he were to form the next government.

Soon after the GE-14 win, on May 10, 2018, Anwar was pardoned and released from prison. On 17 May 2018 , he told Associated Press (AP) that affirmative action policies for Malays must be discarded in favour of a new programme to help the poor, regardless of race.

Anwar said, “I have said that the NEP should be dismantled, but the affirmative action must be more effective…”

He should want to be known as a leader who unites the country. Not just one who defends Islam or only Malays.

Our politicians continue to pander to the ultra-sensitive Malays.

How does one unite a nation, when one section of the community is treated like ‘Little Emperors’, and the rest is basically neglected?

On 13  January 2019, at a dinner with his supporters, Anwar urged the non-Malays to understand the concerns of the Malays/bumiputeras who feared that their rights and position would be threatened.

He should have highlighted the betrayal and exploitation of some Malays by other Malays and mention Tabung Haji, Felda, Mara, the silence of the previous Malay-majority cabinet about the scandal involving 1MDB, and embezzlement in the various ministries by senior civil servants.

For decades, PAS & Umno-Baru made the outrageous claim that the non-Malays, specifically the Chinese, wanted to destroy Malaysia, make it Christian and get rid of Islam and Muslims.

Actually, the real enemy is within the Malay fold. We have yet to investigate the alleged corruption of the money donated to mosques, or tahfiz schools, which will open another Pandora’s Box.

A lowering of the examination pass mark, for the Malays, is self-defeating. The Malays cannot thrive in an environment which stifles competition and creativity. In the law of the jungle, only the fittest and those who are willing to adapt will survive.

We must get rid of affirmative action policies and help all Malaysians, irrespective of skin colour or religion. Get rid of the bangsa and agama (race and religion) on our identity card.

Rakyat must stop being in denial

There is NOTHING in the constitution to say that Malaysian Prime ministers must be Malay.

The ultra-nationalists demand PMs be Malay and some non-Malays, who have been conditioned  by fear, agree with them.

All our PMs were pseudo-Malays with Thai, Turkish, Arab, Chinese, Indonesian and Indian blood coursing through their veins. You also know which pseudo-Malay PMs betrayed us.

Some “Malay” PMs double-crossed the rakyat with their corruption and abuse of power. MO1 brought Malaysia to its knees.

MO1’s corruption did not start during his tenure. The slide started earlier, but worsened with MO1 and his docile cabinet.

So, choose the best man or woman for our PM. He, or she, need NOT be Malay. We need a Malaysian who will fight for the interests of all of Malaysia, and not just a section of the population.

I can already hear the excuses from you.

Remember that in the week before GE-14, most of you thought Umno-Baru could NOT be defeated; but they were.

What’s to stop another miracle from happening? Every Malaysian deserves an equal chance.

(I’ve made my shortlist, start yours!

I won’t publish my list, because these people will get a lot of flack from the nationalists  & religious extremists, especially from Umno-Baru & PAS)