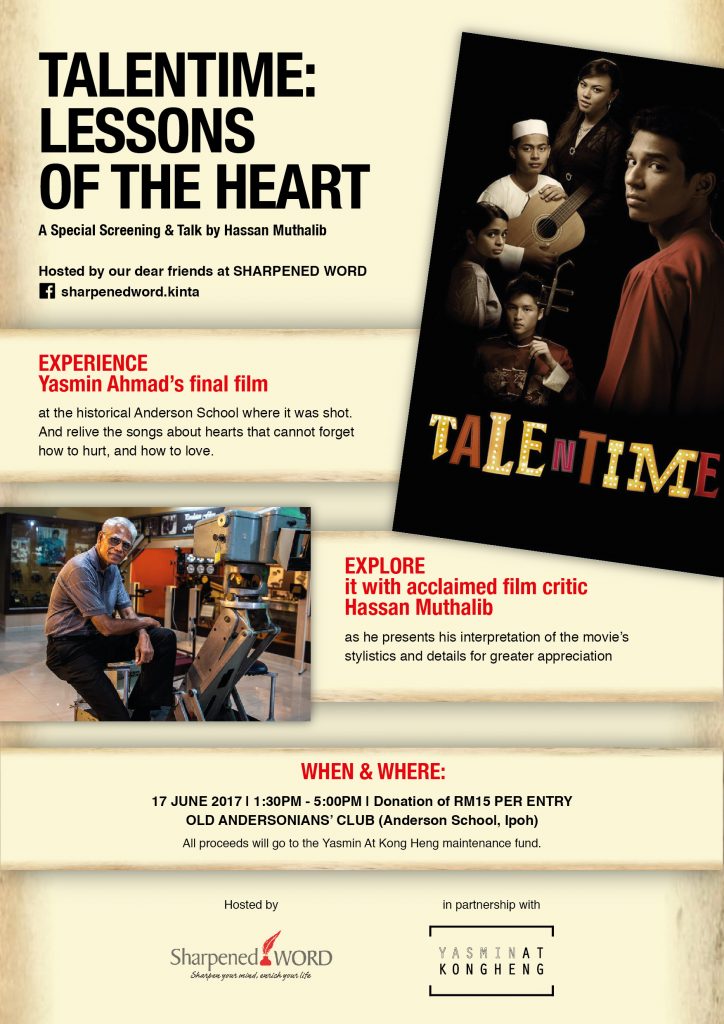 We all miss Yasmin Ahmad’s  commercials. These were short clips which portrayed poignant scenes in Malaysian society. They would come around now, which is just before Hari Raya. They were also aired just before Merdeka, and major festivals like Chinese New Year and Deepavali. Most of the adverts would leave a lump in one’s throat. Many were also tearjerkers.

The Johore-born Yasmin infused the people of different races and religions, who lived under the Malaysian sun, as one people. She liked to impart a message of togetherness and inclusivity, and of a people united. Despite being of different races, these people grew up with similar goals and ideals, and were gripped by the same fears and anxieties.

Yasmin’s last feature film, before she died in July 2009, is Talentime, which was released, a few months, earlier, in March. Talentime was both written and directed by her and it is a story of rich contrasts. Hope and despair. Happiness and sadness. Life and death. The trials in life. Its successes.

Teaser for Talentime, with Pak Hassan showing you the hidden elements in the movie

This Saturday, at the Anderson School where Talentime was filmed, Sharpened Word is hosting film director and critic, Hassan Abdul Muthalib, aka Pak Hassan, who was once Yasmin’s mentor.

Pak Hassan will present an interpretation of the movie stylistics, share the meaning Yasmin wanted to convey in her last movie and witness how her skill as a movie-maker matured and escalated over a short span of time. Talentime cost RM1.3m to make and was shot mostly in SM Anderson, Ipoh.

Entrance to this event, is by donation at RM15 per person. Proceeds will go towards maintaining Yasmin@KongHeng.

For those who missed the movie on the big screen previously, this is the best time to catch up and relive Yasmin’s dream of what she believed this country should be, a dream that will become reality if we do something about it.

So, this Saturday, come and experience Yasmin’s portrayal of Malaysia, through her eyes, in her last film, “Talentime”. An added bonus is Pak Hassan’s help in exploring the moive, the interpretations, the hidden meanings and what the film director would like you to see.