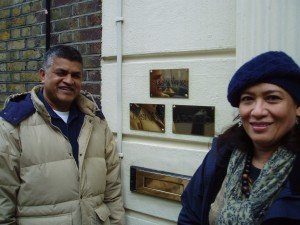 Zunar outside The Spectator’s office, London

If you have ambition to be prime minister or president of a country, do read these handy tips from Zunar. They will save you a lot of embarassment because he will not pick on you and tease you, or mock your leadership.

If you claim that your country is democratic, be prepared to be criticised so that you and your administration know how to improve your performance. Don’t throw your critics in jail or charge them with sedition. Positive criticism is good for all.

If you are leader, don’t keep silent on issues.

If you are spendthrift, don’t show off that you are filthy rich.

If you are a judge, do practise what you learnt at law school and dispense justice fairly, without fear or favour.

If you are a wise leader, don’t make the rich richer and the poor poorer.

If you love golf, try not to play with your best buddy, when the citizens of your country are being flooded out of their homes.

If you love flying, try not to buy a jet for your personal travel but charge the taxpayer for the privilege.

If you like the services of your hairdresser, try not to give him or her too much publicity.

If you love singing, try to sing in the shower and not show off in public.

Zunar’s cartoons, hilarious as they are, always have serious points to make about current issues. Prime ministerial candidates should study the following tips on leadership to avoid a brush with his pen.

Physical attributes. Try not to have any facial feature which Zunar can exaggerate when making a point. A future leader may need plastic surgery to remove his large nose. A woman with an ample cleavage may want to reduce the size of her bosom.

Ability to talk. If a leader keeps silent on important issues, Zunar will find ways and means to make him talk. This is normally done through cartoons depicting the actions of those who are close to the quiet man.

The head. If you have a lot of hair, trim it. If you are bald, do not wear a toupee like Donald Trump does or go through a surgical procedure to cover your smooth pate like a certain politician from Sungei Siput did. Zunar will make that rug come alive. Again, if youâ€™re bald, do not allow a photographer to take your photo from behind because Zunar will draw your shiny patch as a solar panel.

The judiciary. If youâ€™re a judge, practise what you were taught at law school. Uphold justice without fear or favour. If not, Zunar will put a cotton mop on your head and give you a black cloak to wear and a toy hammer to beat your table with, as befits the kangaroo court of Kartun Land.

Defence and armaments. Avoid another Scorpene scandal. The wannabe Defence Minister must ensure that any submarine the government buys with public funds can dive and fighter planes have engines. Refuse the commission, which is normally included in defence deals. The ensuing paper trail is the least of the crooked politicianâ€™s concerns. Zunarâ€™s caustic pen is worse.

Expensive accessories. Avoid these at all costs. Bags should contain only a purse, a powder puff, a lipstick, a cotton handkerchief and mints. They should not contain the equivalent of the countryâ€™s treasury or a banana republicâ€™s GDP.

Savings history. If you have to lie about your savings habits, then at least use common sense. No one believes the adult who claims that she or he started saving for a RM24 million piece of carbon when she or he was a teenager. She or he would have to be a thousand-year-old hag or a Methuselah.

Spending habits. If you want to endear yourself to the less fortunate, donâ€™t reveal that you spend as much as most people earn a day in a month . Donâ€™t encourage people to have a liking for croissants, especially when they cannot afford a loaf of bread or a chapati.

Real versus virtual policing. Anyone who intends to be the next police chief needs to understand that policemen on the beat have a greater chance of reducing crime than the 126,000 policemen who monitor Twitter accounts.

Indiscretion. Least said soonest mended, especially if you believe that you are blessed with the good looks and charm that attract the opposite sex. Not everyone is as vain as you.