It is frustating dealing with Little Napoleons when one pays a visit to a government department. Instead of correcting the error in our application, the Little Napoleon, will tell us that our baju has short sleeves, or the hem is too short, or that one has no tudung on.

It is frustrating dealing with some policemen at a road block, and tell him, that we had NOT been speeding, or had crossed the double white lines, or committed some traffic violation. When he says, “Macam mana mau settle?”, then your fears are confirmed. You have been set up.

It is frustrating dealing with politicians, who promise you the earth, before the election, but promptly break their promises, when we vote for them. 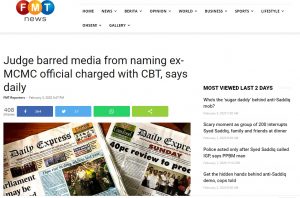 Who would have thought that it is equally frustrating dealing with some members of the judiciary?

A Sabah Sessions Court judge ordered the media NOT to disclose the name of a former top government official who was charged with criminal breach of trust.

The accused is a 40-year-old former Malaysian Communication and Multimedia Commission (MCMC) deputy director of Sabah and Labuan. She had been charged with six counts of misappropriating property entrusted to her involving the sum of RM17,930.

The deputy director had pleaded not guilty before Sessions Court judge Abu Bakar Manat to all charges against her.

She was accused of misusing money to facilitate and organise programmes at six schools between 15 January and 27 February, 2017.

She is being charged under Section 403 of the Penal Code. The charge carries a jail term of between six months and five years, whipping, and also a fine.

The newspaper wanted to name the individual, but the Sessions Court judge forbade the paper from publishing her name.

He said that disclosing the name of the accused “would be unfair to the woman’s schoolgoing children”.

Judge will start a nasty trend

If this is the case, then the judge may start a nasty trend, in that guilty people insist that their names are not published, to save face and further embarassment.