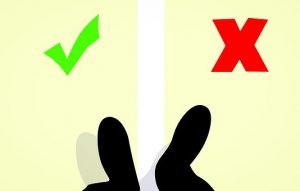 Yin says: GE-14 is shaping up to be the most contentious election since 1969. Anyway it’s going to be the most interesting without question. Master and protégé become enemies and old enemies become friends. Politics make strange bedfellows.

It’s not just among politicians, families are divided – father against son, brother against brother; and friendships fray as sides are taken. Or even when no sides are taken. It is becoming an election of black and white, where no one is allowed to dissent as that is equated with irresponsibility – never mind that one dissents on principle. You are not allowed this as it is labeled a luxury.

You are not allowed a third path – it must be pro UMNO/BN or pro Pakatan Harapan (PH), anything else is unpatriotic , immature and irresponsible.

I tell you what is immature and irresponsible. It is when you say “I don’t care” as did Hafidz Baharom of “RosakUndi”.

Hafidz is either intellectually challenged or extremely inarticulate that his only response is “I don’t care”.

If he had made a case why he neither wants UMNO/BN or PH, then no one can accuse him of being immature and irresponsible. Are all the millenials like him? Surely not! They are the future, but if Hafidz is a reflection of what is to come then this country is doomed.

At the same time those who insist that one must make a choice is wrong. A Hobson’s choice is no choice at all. Dissenters have stated their case against having Mahathir Mohamad as PM. PH has decided to appoint him as is its prerogative, so why can’t dissenters be allowed their prerogative not to accept either? PH has calculated that it cannot win without Mahathir so be it. But it cannot blame dissenters if it doesn’t win. You set up your stall and it’s up to the customers if they want what you offer.

This “if you are not for us, you are against us” mentality is also immature.

Yet those who disagree with PH position are vilified. Even if you write an objective piece you are branded an UMNO cybertrooper (as have I), or are told, as did to me that those who talk loudest do nothing when the chance come to effect change. That deep down I don’t want change so that I will always have something to complain about”.

Everyone is entitled to his views even if they are errant nonsense. Perhaps he wasn’t listening when I said we want Real Change – not change one crook and racist for another. That GE14 is the best opportunity to set a new direction away from “race and religion politics” and  work for national unity – not empty slogans like Bangsa Malaysia and 1Malaysia while all the time dividing the people on race and religion.

We should be pressuring PH to declare national unity as a priority as the price of support. 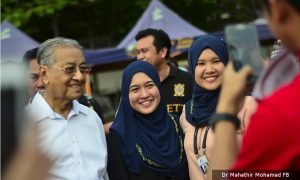 Taking a chance with Mahathir

I had the chance to talk with an Opposition MP this morning and he accepted my argument and confessed that yes, they are taking a chance with Mahathir – if his track record is anything to go by – but they calculated that they need him. It is a judgement call and I respect that.

But if the recent PH Convention in Negri Sembilan is a foretaste of what is to come, then PH has its work cut out to hold the coalition together. You see the hooliganism of PPBM members when they don’t get what they want,and you wonder what they will do (should PH wins government) if they do not get their way. What when Mahathir is told to step down when Anwar gets the pardon, as he is only the interim PM. Or what happens if they don’t get the cabinet seats they want.

However despite all this foreboding, I will say that it is time to boot UMNO/BN out. 60 years is enough. The arrogance of UMNO/BN ministers know no bounds – as with “Never Backtrack” Nazri Aziz, even with an inane tag line – Travel. Enjoy. Respect. – Respect what? Who? You mean tourists pay good money to come to pay their respect?

And then the scandals – going back to Scorpene, Altantuya, Felda, 1MBD  .

UMNO/BN is unfit to govern.

But not voting for UMNO/BNdoes not mean that one must vote for PH; while it has not been very convincing about why it is a better alternative.

It’s not enough to accuse Najib of kleptocracy when your PM designate’s record is not too clean either. But leaving the past behind, what does PH offer for the future? Other than house cleaning,  Malaysians would like the new government to heal the racial divide and build a true Bangsa Malaysia, a 1Malaysia in every sense.  A declaration of intent (to unite the country) would suffice.

What is stopping PH from doing that?