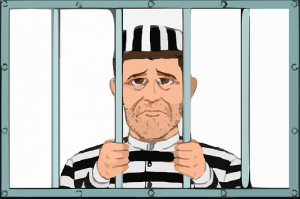 Here are a few questions.

Why do students cheat in their exams?
They cheat because they are too lazy to do any schoolwork and cannot be bothered to study.
Why do people steal?
They steal because they do not want to do an honest day’s work and would rather take from someone, who has done all the hard work
Thieves and cheats must be caught and punished.

GE-14 falls on 9 May. The Prime Minister is afraid. If he loses, the people will give him a new residence in Sungei Buloh.

The people are angry because Najib has auctioned our homeland, to the People’s Republic of China (PRC).

Najib has taken taxpayers’ money. Used it to buy pink diamonds. His stepson has purchased luxury homes in America and in England. Billions of ringgits are stashed away in banks all over the world.

Najib is aware that the people do not like him and his wife. He has taken our money, and he burdens us further with the GST.

As long as he has money, he can buy votes and buy influence. What will he do, when the money is gone?

As he knows he’s going to lose, that is why he will cheat in the general election.

The EC is his tool. Phantom voters. Voter details have been changed. Gerrymandering. Opposition politicians face obstacles when registering their candidacy.

The registrar of Societies (ROS) makes it difficult for Opposition parties to register or campaign as the rules are constantly changing; but the irregularities in the internal Umno-Baru election, in which the party has violated its own constitution, was allowed.

Najib fears the people. He fired his former deputy, Muhyiddin Yassin and the former attorney general Ghani-Patail. Muhyiddin demanded more transparency in 1MDB. Ghani was about to serve the papers on Najib. 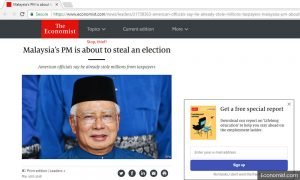 Ordinary Malaysians who criticise Najib are arrested by the police; but he is reluctant to pursue the American newspaper The Wall Street Journal, and The Economist, which made serious allegations about him taking taxpayers’ money and stealing the election. He has refused to take legal action against the Indonesian magazine, Tempo.

Yesterday Dr Mahathir alleged that the plane which was to take him to Langkawi had been sabotaged to prevent him from appearing in the nomination center in Langkaw, the following day.

Dr Mahathir made this serious allegation because the pilots had alerted him to it. Why would they lie? It is a safety issue and the safety of all on board.

So, I ask again. “Who is most afraid of Dr Mahathir and Pakatan Harapan winning?” 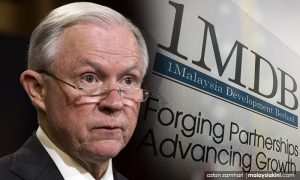