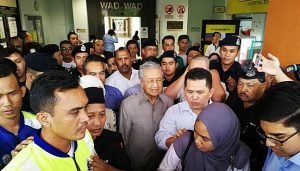 See the video below. Nuff said:

That decision cannot have been an overnight decision. It would have involved, a lot of meetings, talks, discussions. Not everyone will be happy. Not everyone is happy as we have seen from various news articles about grumblings within the various Opposition parties.

Today, a few hours ago,  Mahathir turned up at the Cheras Rehabilitation Centre, to visit jailed Opposition leader, Anwar Ibrahim, who is recovering from his operation.

Malaysia’s longest serving PM, was told that they had received “orders from above”, to prevent him from seeing Anwar.

Mahathir said, “I was told that the Minister of Home Affairs has barred me from visiting Anwar.

“All I wanted to do was visit Anwar and thank him personally on PH reaching a consensus.”

What does this say about Najib and the Home Minister?

They are so scared, that they are making things worse for themselves.

Mahathir said, “We are supposed to live in a democratic nation. Even during my 22 years of rule, when I was called a dictator, I did not forbid anyone from meeting…unlike in this so called democracy.”

So, those who refuse to vote in GE-14, and those who are prepared to spoil your votes, you are of course free to do and think as you please.

Here are two men, once sworn enemies, who are prepared to swallaw their pride, and work together for the better good of the nation.

What does that say about them?

What does that say about you?

Many of us do not like Mahathir, fought against his policies, left the country, were jailed, or suffered in silence, like the majority.

Here is our best opportunity to get rid of Najib Abdul Razak, the man who criticised Mahathir’s policies, for example, his affirmative action polices, and yet Najib has continued to hone them, instead of getting rid of them.

What is stopping you from helping your nation?