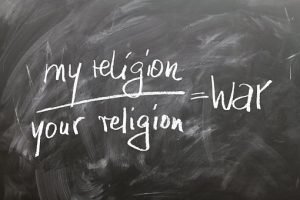 Wan Nor continues her discussion about sensitive issues in Malaysia, the ones which many of us are afraid to tackle and which the authorities discourage us from having; however, we need these conversations and must engage with one another, to find solutions to our problems.

“People Hate Islam? Yes They Do! It’s Time To Have That Talk.”

Part 1 – Where Does the Hate Come From?

When a leader of an Islamist Party says “People hate Islam”, it’s possibly the epitome of hypocrisy.

When a political leader is said to use ‘bai’ah talak tiga’, or pronouncement of conditional divorce for wives leaving party membership, as an oath of allegiance to his party, it is an attack on the family institution.

When a political leader preaches hate, extremism, radicalism, and allegedly harbours connections in support of those linked to terror, he incubates terrorism.

The indoctrination through an Islamisation that has nothing to do with islam, creates the Malay Islamist Archetype.

Many people would consider these politico-Islamist-theologians as tall weed plants bending to the force of the wind. One minute, the Chinese political party is friend, the next it is foe. One minute their Muslim brother is kafir, the next he is declared apostate. They can’t seem to make up their minds on how their fatwas should be decreed. They have difficulty determining which book should be banned, and then they forget why in the first place it was banned.

The politico-Islamist-theologian will use a three-prong approach to ensure effective indoctrination: chronic ignorance; forced dependence on the religious leader, in this case the ulama; and obviously, fear.

His ultimate goal is totalitarian power. His tactic is three-fold: religious validation of patriarchal power; empowerment of fake ulama; and, the safeguard of ketuanan or Malay self-entitlement.These are locked in using man-made syariah law, a law that is selectively enforced by persons who reek of incapacity. His victim will be transformed into a Malay Islamist Archetype. If Malaysia wishes to rid the country of this cancer, de-radicalisation initiatives would need to neutralise these elements.

How does the politico-Islamist-theologian attack? He will create desperation and then offer the solution.

It is like a bomoh, a Malay witch doctor, who tells a man that his wife is being abused by an invisible evil force. Then he offers, to heal her; the only way would be through penetration, him deep inside her. Or, it is like a fireman who sets fire to the village, and then is around to try to save villagers from the fire. When the smoke has disappeared and the ashes are white, what do the villagers do? They hail him as their hero.

In the same way, when a politico-Islamist-theologian says “People hate Islam”, it is to position himself as provider of the solution. Remember that, in the first place, the source of the problem was him; hate, extremism and radicalisation, stemmed from indoctrination through ignorance, dependence and fear. And what will the Malay Islamist Archetype do? He will welcome this solution, perhaps as the only religiously acceptable solution. And thus, together they will create hell on earth for themselves and for everyone around them. It’s a form of Talibanism.

The Malay Islamist Archetype is merely a vehicle for indoctrination, they carry the message of hate and extremism; but they are not the source.

This is what is happening to us

Whilst they play their game of Islamisation that has nothing to do with islam, what happens to the rest of us?

I observe the Muslims drifting into three groups.

Firstly, those whose conscience is so strong that it forces them to reject the Malay version of Islam, they become atheists or deists, or whatever else they end up calling themselves. They go into hiding knowing that they are deemed apostates, thus their ‘blood is halal’. This means that violence directed towards them, or even the indiscriminate slaughter of apostates by extremists is justifiable; it is halal!

The second group is made up of those who refuse to stand down, and who enter a phase of in-depth contemplation, usually centralised on the Quran, in search of the truth, to try to defend Islam and uphold their faith. They are accused of being anti-hadith and identified as deviant. They too are forced underground.

The third and largest group is made up of those who are too afraid, and too confused to do anything. They resign to the prison of followers. Their silence makes them guilty by association. All three groups have one thing in common: hatred for the Malay-made-Islam.

And you wonder why people hate Islam? All this hatred and extremism has destroyed the reputation and faith of the Muslims. It has damaged Islam, a religion of peace which is positioned within the philosophy of compassion and mercy.

The only way out is to uplift the Muslims from this trap. The question is: How? The dilemma is: Who?

For her full profile, please see this link.

If you like this article and would like to continue the conversation with Wan Nor, look out for Part 2 of “People Hate Islam? Yes They Do! It’s Time To Have That Talk.”