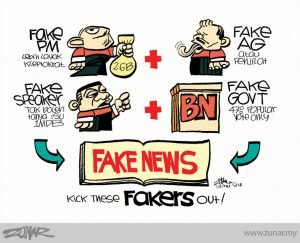 One man’s news, is another man’s lie.

The government wants to pass the Anti-Fake News Bill (AFNB) to punish us and to scare us.

For example, when members of the rakyat, or the Opposition coalition, speak out, to say that  a politician has stolen the rakyat’s money, or that he lied, then with the proposed AFNB, we are the ones who get into trouble. How come?

Why can’t the corrupt politician be exposed? He knows that he has much to lose.

All the rakyat wants are MPs with integrity and principles.

Despite having enough laws to cover fake news, we find that whistleblowers are prosecuted for reporting a crime or an injustice. If procedures to prevent fraud were strictly enforced, these wrongdoings would not occur with increasing regularity.

By right, the politician should be investigated, and punished if he is found guilty.

The AFNB is meant to scare you, so that you do not share things like this video and the articles on my websites, with your friends.

Fake News is actually government propaganda. They want you to believe that the statements that come out of Putrajaya, are the only real news.

You are not allowed to criticise them, but they can punish you.

The government claims that the AFNB is needed to defend “national security and public order,” and has stated that it will not affect freedom of expression, as protected by the Federal Constitution.

The definition of “fake news” is vague. To give unlimited powers to the authorities to determine what can be disseminated to the rakyat is not just time consuming, but will add to the frustrations of the rakyat.

In the age of speedy information gathering and dissemination, the AFNB will frustrate the rakyat because they cannot access the truth.

Ultimately, the AFNB will work against the government.

Don’t be scared. Oppose the AFNB. .

I said that Najib will make himself President for life. That is not fake.

Look at how Najib dictates that laws are swiftly and rashly enacted to stop us from speaking out, to stop us from having free and fair elections, to gag the media, to stop government agencies with good, decent people in them, from functioning effectively.

That is how a dictator functions; but you can stop it!