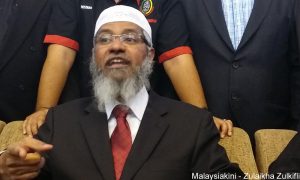 What’s so special about Zakir Naik?

What’s so special about Zakir Naik? Why is he so uniquely deserving of Putrajaya’s support and attention?

These are among the many questions that Malaysians are asking in the wake of the government’s decision to allow him to stay; so far no satisfactory answers have been forthcoming.

Any which way you look at it, Naik is a highly polarizing demagogue. Considered one of the most influential Wahhabi ideologues in the world, he aggressively propagates a version of Islam that even  Saudi Crown Prince Mohammed bin Salman says is in need of reform, and which, incidentally, the National Fatwa Council (NFC) of Malaysia declared “has no place in Malaysia.”

Countries as diverse as Canada, India, the UK and Bangladesh consider him an extremist who seems to endorse terrorism. Some countries have denied him entry as well. Bangladesh alleges that he inspired a terrorist attack in Dhaka in 2016 which left 22 dead. India’s National Investigation Agency is also investigating his foundation for alleged money laundering.

While he consistently denies these allegations and claims that he has been misunderstood or taken out of context, it’s hard not to conclude from even a cursory viewing of his many YouTube offerings that his reputation for extremism is well deserved.

Now that he is in the dock of public opinion, and desperate for refuge in Malaysia, he is attempting an image makeover, claiming that his “primary concern” has always been “to foster social harmony.” He is, of course, being utterly dishonest given that he has a long history of being extremely intolerant, insulting and demeaning of other faiths.

And when cornered by his own remarks, he immediately cries that he is but a victim of some vague conspiracy against Islam, part of a “broader objective of demonising Islam and Muslims,” never mind that it is his own hate-filled invective that does more to demonize Islam that anything else.

While many of us might shudder at the thought of someone like Naik being turned loose in country like ours which is struggling to contain religious and racial extremism, he has apparently no shortage of supporters. With the Wahhabi narrative already well-established in the corridors of power, the NFC’s opinion notwithstanding, he is of course a perfect fit. His choice of abode – in Putrajaya – is itself very telling.

He also seems to have adroitly exploited Malaysia’s political, racial and religious divisions to his advantage, endearing himself to many in UMNO and PAS by his endorsement of both Islamic and Malay supremacism. And they, in turn, have  showered him with a level of praise, privilege and protection that he never found any where else. No surprise then that he loves it here.

The Indian government is now apparently seeking to extradite Naik (who remains an Indian citizen) to face money-laundering and terrorism-related charges.

Ultimately, extradition is a legal matter subject to treaty obligations which the courts must decide upon. The government must take a principled stand and affirm that it will respect its legal obligations. To do otherwise, to insist that Naik be treated differently from others in similar situations, would undermine the government’s own oft-repeated commitment to the rule of law. 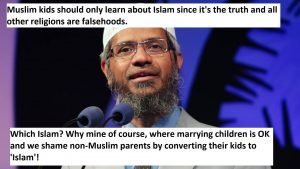 Does Naik deserve to be here?

Beyond the issue of extradition, however, is the larger question of whether or not he deserves to be a Malaysian permanent resident. A strong argument can be made that extremists like Naik do not deserve residency status in our country.

His values, his actions and his worldview stand in sharp contrast to the kind of tolerant, respectful and inclusive nation we are trying to build. He has nothing to contribute to making our nation a strong, united and prosperous one. He is but an intolerant religious bully who does not deserve our respect leave alone our protection.

And don’t forget that this is also the same opportunist who, convinced that UMNO would rule forever, insisted at a seminar last year that Muslims ought to vote for a Muslim leader who might be corrupt (read Najib) rather than a Muslim leader who depends on non-Muslim support (read Mahathir).

Of course, once Najib lost power, he immediately ingratiated himself with Putrajaya’s new leaders and now sings their praises.  And this is the man that some in Pakatan Harapan are now defending.

Naik doesn’t belong here. If he doesn’t have the courage to return home to India to answer the charges against him, let him find sanctuary in Saudi Arabia; after all, he is a great admirer of the Wahhabi clerics who hold sway there.

Government owes us an explanation

In the interest of transparency, the government has an obligation to explain why it refuses to extradite him and why he deserves to remain in Malaysia.

As well, the government needs to clarify whether it is paying for Naik’s ever-present security detail, whether he is receiving financial support of any kind from the public purse, and whether he is being considered for Malaysian citizenship now that India has withdrawn his passport.

Whatever it is, the government should not underestimate how deeply offended many Malaysians are with Naik and how deeply disappointed they are by the inexplicable and shocking decision to continue to offer him sanctuary here.