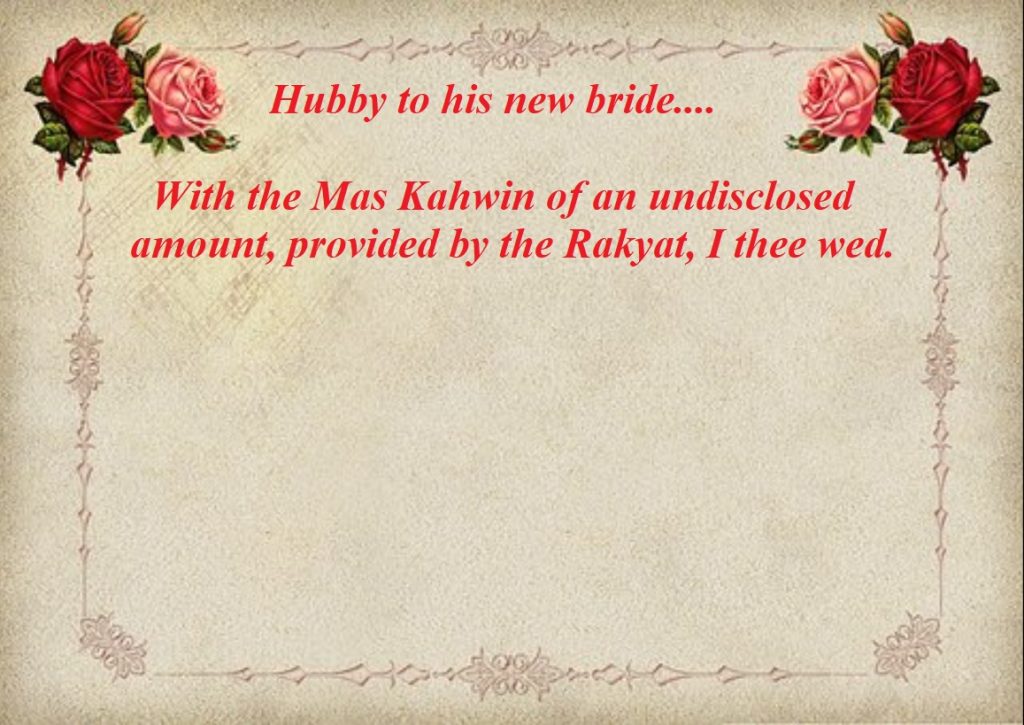 Yesterday, Deputy Prime Minister, Zahid Hamidi told Ali Rustam, the former Melaka chief minister and Umno vice-president who lost in GE-14, “Ali, don’t worry. I am your brother. I will help you to make sure you win again.”

How? An election is decided by the people. Zahid has no say. How will he fix it?

Anyway, the Malaysian rakyat is fed up with both of them.

Remember the award for the tackiest wedding of the year in September/October 2012?

It went to Malacca Chief Minister (CM) Ali Rustam, who treated his son and daughter-in-law as goods and touted their wedding in a sponsorship deal.

The newlyweds have been propelled into the glare of publicity, for the wrong reasons. Cynics will make fun of them and say that instead of the usual marriage vows, the groom, Mohd Ridhwan will have said, “I accept Nur Azieha’s hand in marriage, with the mas kahwin of an undisclosed amount, provided for by the taxpayer”.

Bringing the office of the CM into disrepute

As a true blueblood Umno-BaruPutra, Ali Rustam is more concerned about image, much like his mentor Prime minister Najib Abdul Razak. The CM lacks humility, and has no respect for the sanctity of the marriage union. Many aspects of the wedding smack of corrupt dealings. The CM has, in the past, faced allegations of ‘money politics’.

To accept sponsorship for his son’s wedding is degrading, but Ali is neither the first, nor last. Over the years, many other social climbers and celebrities have paraded a variety of products from cup noodles to chocolates.

With rumours circulating that Ali is seeking an important role in the Umno-Baru hierarchy, he was prepared to politicise his son’s wedding, and gain brownie points. The wedding chariot, the beca, was decked with tinseled ‘1Malaysia’ cut-outs – tasteless shows of allegiance which doubtless, will have gone down well with Najib. 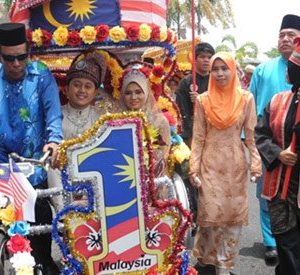 Behind the scenes, it is possible that one or more companies have offered to ‘sponsor’ the newlyweds on an all-expenses-paid-honeymoon in an exotic idyll.

The truth is that Ali is a cheapskate. He knows that in this day and age of keeping up with the Joneses, he could not be content with a quiet family affair. Grand weddings do not come cheap.

As he was unable to sell the rights to his son’s wedding to the celebrity gossip magazine ‘OK!’ then perhaps, in his opinion, local companies would suffice. Anything to get free goods and services. Umno-Baru politician = Freeloader.

Most sensible parents treat the wedding of their children as a joyous and memorable occasion, but Ali treats his son’s wedding like a convenient to prepare ‘3-in-1’ coffee drink; The sweetener equals the companies and government departments providing free goods or services; The creamer equals the gifts from the businesses desperate to kowtow to Ali Rustam. These are pre-mixed with the coffee powder (the wedding couple). The guests, all 130,000 of them equal the hot water. All the CM has to do is to add hot water to the 3-in-1 mix, except this time, Ali has found himself in hot water.

Anyone heard of a struggling Umno-Baru politician during a recession?

Austerity measures are a necessary part of our lives and many Malaysians struggle to feed their families. Ali is unaffected by increased costs of basic goods, petrol and services. He is reported to have said that the wedding was “cheap to organise”, and has hit back at his critics calling them ‘spiteful and jealous’.

Ali is far removed from reality. He wants to impress with his wealth and described the RM600,000 bill as “cheap”. Perhaps, it is cheap and “not extravagant” by Umno standards. One fears to think what Umno politicians consider “expensive”. Is Ali aware that many Malaysians earn less than RM60,000 a year? 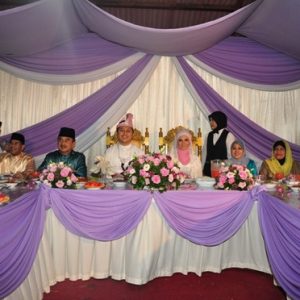 Umno-BaruPutras and “conflict of interest”

The hefty bill raises two questions: First. How does a CM on the government payroll, have access to such sums of money? Second. He is a public official and in any civilized part of the world, free lunches must be declared to the body which monitors gratuities given to public servants.

Malaysians are weary of their public officials stealing the taxpayer’s money. The amount of government agencies and businesses “sponsoring” the wedding reception is a conflict of interest. What did they get in exchange for providing goods and services? People who see nothing wrong with Ali’s misappropriation of public funds must know that there is no such thing as a free lunch.

Neither Ali nor his colleagues in Umno understand the meaning of “conflict of interest”. Ali brushed aside claims of corruption. He takes his cue from Najib who misused taxpayer’s money when he allegedly flew close friends and family to Kazakhstan for an “official meeting”. It was alleged that Najib and his entourage had attended the engagement party of his daughter to the nephew of the Kazakhstan president.

In Malacca, some individuals see nothing wrong in what Ali did, because they believe that his private affairs are his business. Do these people think it acceptable for Ali to use government facilities, equipment and manpower? Will the Malacca government accord the same privileges to ordinary members of the public?

Umno-Baru politicians have grown to like the power they wield and the wealth they accrue once they are in office. They have also grown brash and arrogant and are desensitised to the suffering of Malaysians. Ali and his colleagues know that there will be no probe into their accumulated wealth, nor for their abuse of the system. The law and its enforcement agencies serve them.

The wedding is the rakyat’s blessing in disguise. It has opened our eyes, especially of those who still claim Umno-Baru is their champion.

The other significance of this wedding is that it is an indication of the dwindling support for Umno-Baru. The party has been abusing the system for several decades. In the past, we just kept quiet. Today, our anger is aroused.

How much was spent on the wedding? You do the maths. There was a separate reception for members of royalty. 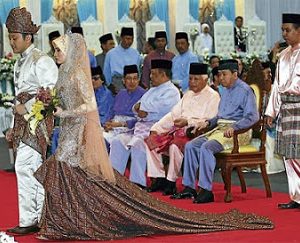 Never before has a wedding been such a flop. Instead of talking about the radiance of the bride, and how happy the couple look, we are discussing the alleged corruption of the father of the groom, and whether the nasi minyak cost RM4, RM40 or RM400? Does any girl want to be known as the ‘KR1M’ bride (Kedai Runcit ‘1Malaysia’)?

People who abuse the system, know who their friends are, when the time comes to face corruption charges. If businesses are prepared to finance their private events today, will the same business leaders help post bail for them, when the inevitable crunch comes?

Let this show of extravagance be a lesson to Ali Rustam and other Umno bigwigs. Malaysians refuse to bankroll Umno and their excesses any more. Malaysians will help expose and question such abuses. They will demand answers. The time has come. The worm has turned.

Zahid wants to ensure that Ali wins. We will make sure that will not happen!